Turning the corner- the wired journlalist 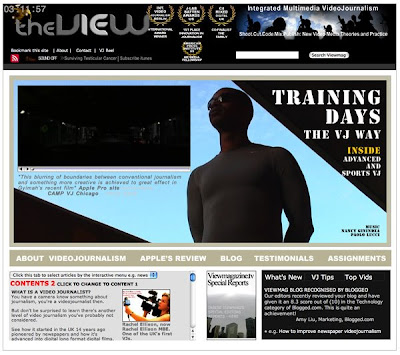 The "once it was all so simple" talk is redundant really.

For from the seeds of Camp VJs philosophy [ and we just about scratched the surface] is the notion of the ultra wired journalists.

How to mash up, filter, disseminate to, and aggregate shared interests and well as encouraging new participants; it sounds a heady mix, but it's that simple.

I've been thinking through this for eons and it part explains why my career is a series of jumps from one domain to another.

When I aquired my first powerbook in 99, I cut a piece tin which Channel 4's Jon Snow [ I was freelancing there at the time] remarked... "and that's broadcast quality. Wow?

Over at the Beep, the then head of foreign news showed interest after a meeting, but echoed a much chimed comment" "What exactly do you do?"

Radio, TV, the Net, building web sites, magazines, making commercials and promos, Compression technology, Flash, Director, media policy - all of which I might add now have congealed into my Phd studies.

And there were many many others, whom like me, would get confused looks.

Still confused looks, that anyone should know more than the prerequesite: what ever that is.

It's changing, changing, get over it, said Jeff Jarvis in an interview I had with him.

So to the media I ask what are you going to do, he concluded.

There are no limits now to what we may learn and what we need to learn. The market, a tumbling one, is fluid. Yes video will ride the crest, but it's also about the new judgement of news, info flows. The skill now is in being one of them.

Not a news hound, but someone concerned about news as a consumer, with an understanding how to let it go, until like the kite runner you artfully reel it in.

It's about the workflow of a new discourse in news. We haven't yet scratched the surface I feel.

Take this device for instance - a bluetooth transmitter recorder that allows me to leave a message and for that message to find recipient blue tooths within a radius; hoping about before it finds its source. Now what if I talked about a random selection of news items, what if I talked about this here and a number of us had meta key words. That message would find its way onto my device - from the US and the likes [ yes welcome to the thought police]

The whole world will be noisily exchanging data by the second that anyone could use - one big telephone exchange, but I can key into dense words thus filtering what I want to hear between said or not recipients.

News is in itself a conversation. It's just some bright spark deems one conversation more laudable than the other, depending on constituents, time, money, primacy, value etc.

And what of the old world. Will it realy be that soon? Will this very laptop become redundant for something else.

What will the future of studies at a university be like?

A former chancellor and government advisor gives an amazing insight.

In the next few weeks I'm going to be collaborating with Sandy, a financial wizz in the city, whose ideas mirror my own. One of the first pieces should be an insight into the high risk of money management in a manner which we hope opens uo further debate about the way things were done
Posted by Dr David Dunkley Gyimah at 10:46 pm