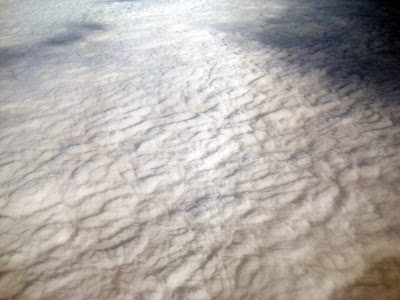 At thirty thousand feet the world looks a different place.

Some people however don't need physics to give them a seated lofty view of the world.

Duncan Whitman, who I have pinged a few times is back in London. And it hopefully looks like we/us could be closer to a utility that will firstly disrupt the broadcast/new media industry and provide a mezze of broadcast utilities into your hands.

Yesterday whilst supervising some students, another game changer crossed my path.

Some graphic students in their final 3rd year submission had asked me to take a look at their work. Some months earlier one of them had mentioned something, with me muttering something like: "look forward to seeing it".

Good Grief: Nothing short of genius. The beauty of their design, with graphic boards, copious notes on the technology and animated video shows an emerging plausible future for newspapers and broadcasting merging.

I'd love to show you, but I was the first to say, they need to find a way of protecting their design, yet at the same time placing it under the noses of those who might see what they see.

At a conference some years ago I interviewed two entrepreneurs/ technologists designing different systems: one the tablet, the other flexi-screen app.

What the graphics group at the Uni have done is unknowingly elegantly merge the two with their own innovations.

Hope to bring you some more when we've figured how to do so in their interests.
Posted by Dr David Dunkley Gyimah at 11:01 am