The future of TV and media - or one of them 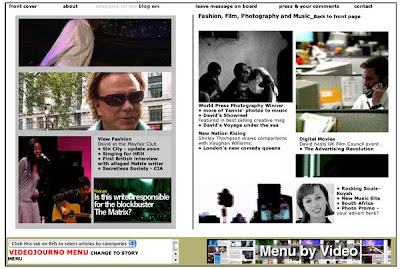 I'm sitting at my laptop outside a cafe having picked up a wifi spot watching live TV in high definition.

I'm not sitting chained to my TV, and the news is not coming through a browser.

Actually I have got several browser windows open.

The chap now sitting in his office is watching the same stream on his Iphone.

TV, the furniture that sat in the corner and brought us all together has had another nail in it.

Meanwhile, the VOD model, we're all wedded to has had an internal makeover here at Viewmagazine.tv so I can go back to a theme that I originally used on viewmag.

Take this animated menu here. They consist of .swf files which can easily call other swf files.

That's eay way of Flash working - a swf file is one of the export files, a bit like quicktime or .jpg

But then .FLV's became all the rage and things were not so straight forward.

Why use a FLV file. Well I can attach any array of play controls included this cool one I have unearthed and it can stream from my server or any other number of variables.

It's a far more tricker if not near damn tiresome with swf. because for one attaching a player ain't so simple.

So another problem solved, thanks to my good mate Sav - A Flash expert.

Even though I was barely audible I caugh people looking at me on the train as we discussed whethe the action scripting should be on the frame or lens itself to a preload.

At WAN I'm going to walk through the costing and points to set up a videojournalism station.

The final part of the chain has always been distribution and so far you either rely on a streaming server or you adopt the VOD approach.

Playing out live changes absolutely everything as you'll see from the video I'm making.
______

Very good friends, who I call cuz presents on WLIB same station as Chuck D. who is now in the UK celebrating Public Enemies reunion.