An entangled web - the minority report 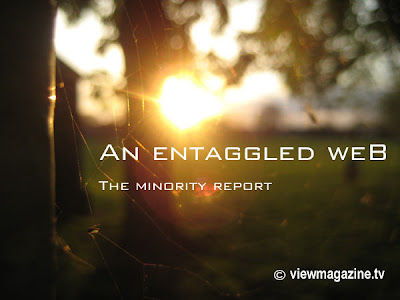 The one major emerging travesty of the web, in spite of its free-for-all, low entry point, is the dearth of dominant accessible news featuring events and people packaged well enough to bring us closer to understand this world.

That's not to deny millions of sites exist for every conceivable subject, about minority issues and the disenfranchised, but that they are elbowed down by existing and emerging web behemoths.

The dash for cash and supremacy in this new comms age, has made the playing field more stumpier.

Social network sites may be the answer, but even they need a kickstart, someone, a group to move the issue up the social-google-ladder.

Much was promised about the web's democratic leanings, though if you knew better you would not have held your breath.

Television could not feature this or that because, well, no one gave it any quarter on TV; pathetic viewing audiences, and the numbers-cost-quotient did not add up.

The web would solve that problem. Space and time were irrelevant.

In a post I wrote for Journalism.co.uk, Broadband it would be a shame to waste it, I said about television on the web:

There are echoes of satellite TV's grand arrival where an opportunity to broaden the news agenda and perhaps even diversify simply turned to the broadcast economics law of recycling for the sake of advertising returns.

Broadband's ever-expanding capacity offers scintillating prospects for innovation - it would be a great shame to waste it.

At several conferences I have attended or spoken at revolving around majority packaged by others as minority issues, there's been hair pulling about how they find a voice.

The Africa Summit at the University of Westminster was one of them.

WeMedia Conference two years ago was when for me it was apparent this was a "child care" issue.

We talk about it, pay attention to it, but then settle back into our own dominions at the end of the day, whilst the real parents get on with the up bringing.

In years to come, a generation may well look back on this era and becry what we did with all our massive comms power, which could have save the earth, or saved a people from their government.

But we had other things in mind.

An entangled web builds up on this - something some very talented film makers I know here are looking at.
Posted by Dr David Dunkley Gyimah at 11:55 am