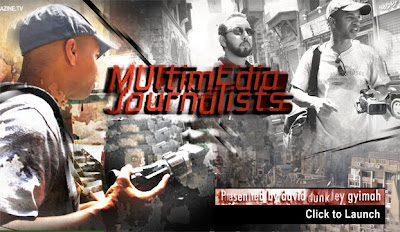 It's easy to assume videojournalism is an easily acquired skill; it is, but if you've very little visual spatial skills, you're a shrinking violet and the last time you wrote something was for the school nativity play, you're on a steep learning curve.

Then there's the interpersonal skills. If you're a VJ of the kind I worked through, you've got to be as amiable as you are tough at making those split decisions [on your own].

Like any creative discipline, or for that matter any job, you've got to live through it and make mistakes. And you have to adopt a selfless and fearless veneer about failing.

Budding actors taking classes (did that) know a thing or two about how to fail, and getting to know themselves and those around you very quickly. There's something in that.

One reason why news discourse has moved very little in comparison to cinema's language or literature, re: the novel, could partially be put down to the entrenchment of news' classical episteme.

Just as an ill conceived and erroneous notion exist of journalists graduating from radio to TV, creatives within news, either move into docs or drama.

In its fifty years the dominant hegemony of news is to deliver the facts, thus rendering overt creative news programming as antithetical.

A fear of tinkering with this form or pushing any creative streak is eschewed. Blame the 70s/80s, with the number crunchers moving in and journalism realising its business acumen to turn a fast buck.

Thus if "You wanna be creative, go make movies!"

But as many social scientists will note, paradigms do shift, and the classical position can and is on occasion successfully challenged.

There's a wonderful quote from Kubrick, where he says: "I want to change the form of cinema", and he did with what is acclaimed to be one of cinema's best film ending in Paths of Glory.

When was the last time you heard that from a news executive. There are so many factors at play here e.g. economic model, creative zone, historical habits that work against TV's half full status, exacted by some of its present 'gate keepers'.

This will likely change years down the line. History tells us that. We've only just experienced the birth of a new digital feisty form.

The auterism within videojournalism envelopes several iterations of many other creative forms.

Just as cubism is a sibling of surrealism, derived from impressionism rebelled against realism.

Videojournalism - painting with video - has its lineage.

It's one reason photographers, journalists, graphic designers, visual journalists have all found their own independent windows to enter the form and recreate their own magic. 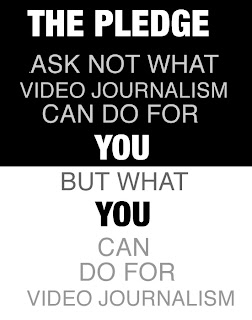 Me, the peripatetic life I led as first a bi-media journalist/producer from 1987 within the BBC, (radio and TV) followed by employment in several different media companies, my educational background, and own personal interests have come to shape a strong sense of:


How your past influences the present

From the BBC, I learned the purpose of the pre-shoot script, from the agency WTN, which would become APTV, I learned how to spot and cut-on-the-fly sequences coming from multiple satellite feeds demanded by broadcasters. The 'bird' - sat 41 was permanently fixed on the Mid East stories.

At ITN/Channel 4 News, how to play with words and produce in situ, whilst staying true to the journalism. From the many years of applied chemistry how to turn abstracts into the physical and embark on one experiment after another; LSE - the economics of course.

Whilst starting off as a videojournalist in 94 how to spot a story and carve it up several ways, then turn it around in a matter of minutes.


From Radio 4 and BBC radio presenting, the power of the voice as an instrument. This perhaps is one of the less recognised assets for a journalist. How to attenuate your voice range without seeming supercilious.

At ABC News, the American way of doing things; New Media, an appreciation that online it's all connected; with ex Saatchi head of TV Jon Staton whose agency re-active y re-active where I was a creative director, the emotional pull of the video and copy. The fewer the words, the better.

There's much we all bring from our past into our jobs and VJs blank status ( I mean its relatively short life span) means it can be directed into a number of routes.

But for that to happen, it requires practitioners stick their heads out, talking and sharing the form, discarding the dogma (we all sadly suffer those at times) that accompanies new skills and also enjoying the fruits of their labour in making public their work.

To rephrase Nike in relation to how you might get vj'ed up, means being reflexive about how the sum of your past add up. What is it? "Just Live it". 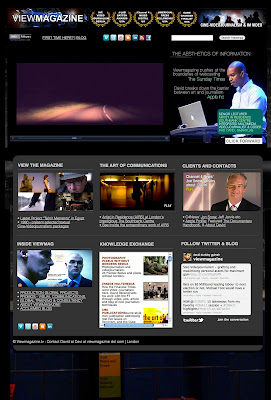 Find out about Integrated Multimedia Videojournalism at Viewmagazine.tv with a number of how tos and interviews ranging from the former head of the CIA and Quincy Jones

Related posts - using Heidegger to comprehend an approach to videojournalism
Posted by Dr David Dunkley Gyimah at 11:50 am