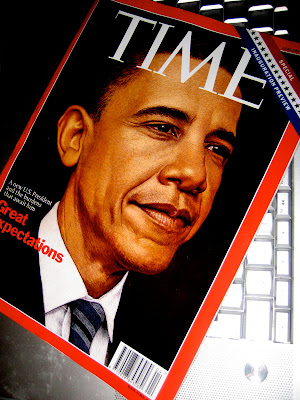 Witty piece in Time's inauguration preview issue by Michael Kinsley noting how the Brits (us) having lost it all, have now been stripped of that quintessential omni role of being the Voice of God.

And that it's now to be found in the rotund vowels of James Earl Jones, behind CNN's tag :" This is CNN", [Does he get royalties each time he says it?] and Morgan Freeman.

Essentially without delving into the minutiae, Kinsley has noted the accented Shakespearean presence that was behoved to the Almighty is no more.

Burton, Gielgud, and Guinness, some of the finest thespians of their generation once convinced a generation of US nursery kids who'd pester their mom and dads why God was speaking in a funny accent.

Well those days are long gone, though Kinsley forgot to give Julian Bond a mention: I mean Eye of the Prize..

Any wonder, he says that if a Black Man could be God, then high time he made president.

Here's a trick given to me by a veteran voice over artist when I had to do the occasional piece in my high squeel voice, have some chocolate. Apparently it dampens the chords, making them resonate less and you begin to sound like Barry White.
Posted by Dr David Dunkley Gyimah at 12:47 am