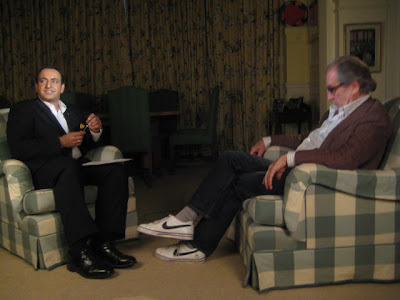 Some people are born with it; others acquire it, some never achieve it.

Riz Khan, an old friend based in Washington where he hosts his popular show, Q&A with Riz, definitely has it.

That innate ability to connect with people and in many cases connect them up.

In the latter it's a selfless quality pairing up ideas and names, in which the connector receives nothing in return, other than the silent joy of seeing something come of an intro.

On a flying visit to London we caught up with each other. Firstly where can you find a decent pub when you want one.

Pub found. And really those non-smoking rules do make all the difference.

Off the back from interviewing Oliver Stone, and with an enviable roll call of names to his show's credits, we talked ambitions and the future.

At heart, Riz is a geek. We could talk Macs and Ipods all day. In fact there was a time when we did, editing programmes through the night, following Riz's reportage from the Hajj for the BBC World Service

Now at Al Jazeera where he's been based since leaving CNN International at the turn of the millennium, his audience may know him as the news anchor and talk host, but there are many other layers there.

He's done little in the way of Breaking New outside broadcasts more recently, but happened to be in Mumbai at the time of the terrorist attack and found himself hosting an off-the-cuff live show for a couple of days.

But then we come down to connecting. It's that old chestnut between connectors. You never overtly ask, don't think I ever do, but an idea sparks another idea, which leads a connector to proclaim interest in how the idea can be taken further.

Successful connectors as Malcolm Gladwell points out in Tipping point have certain qualities.

They're very likeable, have a diverse number of friends and are well trusted, and as such make good dinner guests. [ I added that last bit]

In Riz's case dinner with Kofi Annan, or former UK PMs are just one of those things.

AJ, is yet to break through into the US, though 60 percent of online traffic during Riz's show, which combines interactive feedback via Livestation, comes from the states.


Two hours pass and a couple of things we'd like to do for 2009 and time to wrap. With Riz the connecting doesn't stop.

Making our way out of the pub, an elderly man spots him. "Hi, like the show".