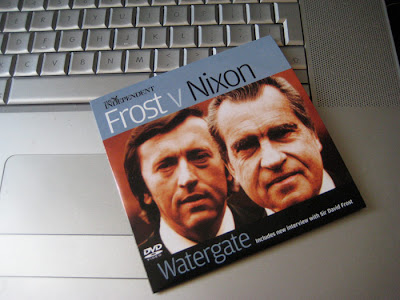 It's not often an interviewer will make an exec look like they're on the run, let alone a president or former. Frosts now epochal interview with Nixon over Watergate, the subject of a current film Frost Nixon, is worth seeing.

But why just go to the cinema when you can acquire the original - a collectors item for the princely sum of £1.60, because it came free today as a giveaway with the Independent newspaper.

Strange how you can find moments that make you reach for your contemporary history book to rediscover the events.

I was with ABC News in South Africa at the time, in the midst of the South African election, when ABC staff begun reflecting, hearing that Nixon was poorly and would likely not recover.

If you haven't got the DVD hunt one down.
Posted by Dr David Dunkley Gyimah at 1:11 am