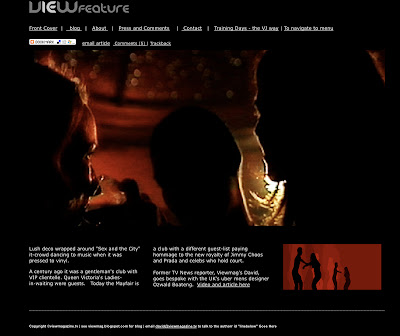 Viewmagazine.tv is going through a few face lifts. At some point I thought of abandoning it. But have slowly come around to an alternative.

Quite a few of the videos, you've prob noticed don't have controls. That's because they're pre-Flash FLV.[2003]

It was a nice idea back then to present video at all.

But user control and navigation are even more pertinent now than they were back then , so it's meant reworking those files.

Similarly, even CSS on the pages require updates with hand held encoding, particularly if you're using IE 6 or 5.

Understanding what's going on is probably good enough for me, but then seeing something out of kilter needs remedying.

I'm a firm believer in the rule of interdependence: let the specialists do what they do, but when everyone's busy, you've simply got to pick up the tools and try and do it yourself. That was what brought on viewmagazine in the first place.

The articles are often an illustration of a theme, and perhaps a method of how I might cover it.

So the report on The Mayfair Club, one of London's most fashionable night clubs, whilst not new as a feature piece, coupled with the more open use of white space in the article, provides an example of a particular slice of work.

Here's the Mayfair Redux, and an update coming soon.
Posted by Dr David Dunkley Gyimah at 12:18 am

David - have you thought of using one of the magazine style blog templates and mash yr website and blog into one?

I was thinking of doing that but I would have to update my blog a lot more often for it to work...

I've got Brian's whole set of revolution, but same reason, it'd mean updating it a lot more ie the website.

Another route would be to migrate this blog into viewmag.

To do that, I have got to change from a windows platform to linux.

I might get round to doing that, once I'm assured I have got all the back up files.

Interesting where we are with off the shelf templates, with a whole raft of templates.