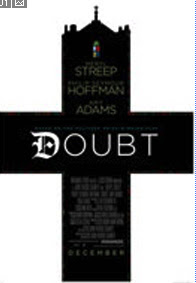 Fighting for the same attention, eye balls, time and money, cinema bosses have become complicit to a number of ways to get front row, before you decide staying at home for a rerun of Wired - fantastic drama - is indeed a good idea.

Hollywood kickstarted the trailer, it discovered the DVD, and now a surprisingly interesting proposition.

I first noticed it on Doubt - an intense drama on the morality and burden of proof of child abuse by a member of the cloth, staring Hoffman and Streep.

And more recently, before general release on the much-talked about Valkyrie starring Tom Cruise amongst many, documenting the intended assassination of Hitler.

In both cases, though it's now deprecated on "Doubt", you could watch the first six minutes of the film.

I can't think why only six minutes, but what bosses perhaps are gambling on is that it's enough to get you immersed into the characters and the chance to make up your own mind against the welter of flux talk - that's the back chat over a movie's worthiness.

And I'd say it seems to work. In both cases I can see myself trundling off to the plex and handing over my tenner.

The days of "tent poling" and the likes, on TV, are being usurped by the depletion of appointment TV, more so online. And so it's online where these ideas to engage the new, time poor, consumers could play out.

I'll say something though for TV.

NBC 1998 and their innovotary exploration of "Homicide - Life on the Street", which saw an extension of the TV episode play out on the web, with a new team of detectives.