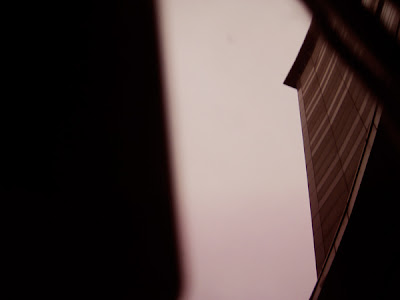 RTS meeting, 5th floor
When the email came, it was a polite, short, and to the point.

That was 3 months ago.

Today we gathered. Nine of us off Black friars, near Fleet street - the home once upon a time of the might of British newspaper journalism.

Our task might have been simple enough, but there was nothing simplistic about it: to judge this year's UK winners of the Royal Television Society Awards in News Innovation.

It is a highly sought after award, the equivalent in the US would be the EMMYS and it strap line is often emblazoned across the face of its victors. This year's entrants, as always, were stellar.

There's much I would like to discuss here, but I won't because it violates the openness in which juror members spoke.

There is substance in this that could lead to further debates for academic purposes, so I have an idea. But for this session a reworked edict of one of my haunts rules, Chatham House rules.

All I'll say is the submissions mixed online, with offline, video journalism and personalised video, drama and journalism, and ambition with ingenuity providing the seeds of where TV could, might go next.

After the awards event itself in February, I may post more expansively where there will be appropriate context. 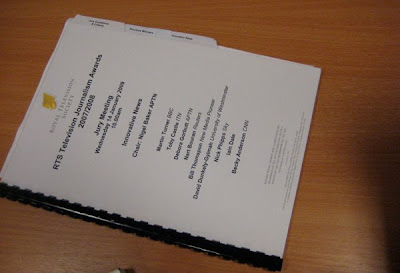 What is Innovation
Innovation is a fascinating area of enquiry. What defines it? What values are inherent within it? And is it an acquirable commodity?

The media whirlwind we see ourselves surrounded by at present is being whipped up by innovation and creativity, and there will, I hedge, be much store placed on this as we move into a new cycle of offline and online expansion in these trying times.

Bill Thompson, a technology pioneer for which much has been written about was one of the jurors and this supposition is an area I will return to with Bill in mind.

Incidentally, and I hope he's not embarrassed but here's Bill in 1996 from a broadcast about the future of British newspapers made by a Videojournalist colleague of mine. [link soon]

There is a note which affects my own assessment of innovation, and I'm referring here more to my job as a senior lecturer.

It is that no matter what I see, however small or grandiose something is in its bid to be innovatory, there is much that can be discovered about process and fortitude.

Those qualities alone may not win for innovation but I'm intrigued about that process all the same, the ethnographic quality.

So in debates I have learned not to be so dismissive. That said by the end of the day there has to be a winner and alas genius can often be a scant commodity.


Searching for Innovation
On a general note as well, what we consider innovatory, may well be, and sometimes be far off the mark.

Innovation searches for great leaders, whom inspire others, and the more diverse the debate about the journey, the more creative, I believe can be the outcome.

Watching Danny Boyle, an awesome figure, talk about Slumdog Millionaire which swept the board at the Golden Globes, is a typical example.

After screening to an Asian audience, he was asked on the BBC's Culture Show how he managed to get the richness of the city on screen in a way that suggested he must have lived there.

I was lucky, Boyle said, but then he spoke about someone, I'm presuming a fixer, he had kept on and would advise him and his team where they could be going wrong making clunky mistakes.

You can see this 7.29 minutes in on the Culture Show on the BBC's I- player. But quick because after a week this link is deprecated.

Innovation is a mixed mind pursuit. At the start of the web 2.o "S" curve, it was an Achilles for TV. But much, much, has changed since. Though "mixing it up" still holds water.

This article from Edward Roussel, digital editor of the Telegraph Media Group, for the Nieman Harvard Reports site is a compass for navigating the new journalism, and being innovative.

So back to the RTS. It is an award for innovation, which did have me asking introspectively. Why me as a juror?

I might have wishfully hoped the fact that I had a broadcast past, had worked across several broadcasters -all with different house styles - had an insight into the world of newspapers and would yap like a terrier without drawing breath if I was brought onto the subject of innovation and new media.

No, I'm certain, but I didn't ask. But mixing non broadcasters and broadcasters in a room together does yield interesting areas of discourse, so there it is perhaps: that mixture of academia and media.

But I was here all the same and am looking forward to the event itself, where I hope [with permission] I can put together a VJ feature package around this most fascinating of subjects.