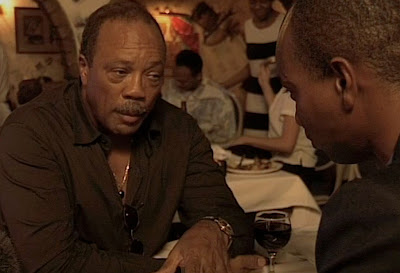 An interview with one of the world's greatest musicians and
composers Quincy Jones, but how many times can I repackage this?

Video journalism is badly in need of a neologism.

It's not nearly enough now to categorise a video piece with journalism as the apotheosis of video journalism in much the same way an astute writer in the 60s might have said there were writers from New Journalism.

The exception, there are no ontological categories for VJism as yet, meaning it's so fresh a form that we're yet to assign prescriptive genres other than proclaiming a VJ piece as "breaking news" or "featured piece from a broadcaster or non broadcaster".

Categories have their purpose: in awards it's the difference sometimes of a few more hundred submissions. But for future generations I'm inclined to think, we'll likely hear of the "accelerated VJ" or "Photologue VJ" ~ more neologism.

You could argue that in fact many video journalists are indeed not what they seem, whilst others actively, with good reason reject the claim.

The simple def for VJ is that person who does it all, but there's no accountability for style, substance or proficiency. You could be an amateur film maker, photographer, in broadcasting a P&D ( producer/director) but in video journalism you are who you say you are.

Does it matter? I'm not arguing either way, but attempting to dig deeper into process and production, setting out to refine some thoughts for 2009.

I might call myself a VJ, but don't deny I've P&D'ed network TV programmes, made promos, produced commercials, shot this and that... you get the picture.

For that reason then what am I? And does the term alone VJ suffice, indeed for a generation of 90s talent who shot factual programmes on DV Cam? And also now generation?


In search of the VJ plus
The more intriguing aspect for me has always been the "whole". A body of work, a film, exists as is, but the transaction between the maker and audience still has connected dots with marketing, posters, campaigns and indeed the net.

Video online is as much influenced by the furniture around it; even when it's white space(-), the site design, the allure, the wow, ease of use - all matter if you're looking to build an audience.

Again multimedia, I have said in previous posts, is just the half of it.

At Future TV, one of first conferences of many digital media to kick start 2009, the body of knowledge in the sessions assumes compelling content is a given i.e you've already got Quincy Jones, but how do you a publisher or broadcaster become omnipresent?

Is that still possible?

For a more robust explanation of this read Dealing with Darwin by Geoffrey Moore. Here's an illustrative cycle well worth looking at for how innovation beds down and early adopters versus Early Majority

Those wise web guys and gals who showed you the big L, well guess what? You now know what they know and you've got the content.

On Future TV, this caught my eye.

CONFERENCE TRACK TWO: MARKETING & BRAND MANAGEMENT
7 counterintuitive strategies to succeed in a Web2.0 world
We're back to basics, updated for the 21st century. All the content in the world, the new technology to boot, and if you're a corporation not bringing it in, woops!

Because we're back to the fluidity of the brand. Did we ever leave it? Briefly, fleetingly, because for a moment everyone else's opinion mattered but the publishers.

The kerzillions of conferences during the 90s that we covered unveiling marketing plan after plan; now there's a whole new branch of social philosophers detailing how we consumers do what we do.

I'm fascinated by the the above, deeply, deeply so. It engages every aspect of the creative process I have come to know in design, film and marketing.

Because it engenders behaviour, value, desire - the qualities of desire, want, need and aesthetics.

That's pretty much my 2009 thoughts mapped out. And as for video journalism why can't it be called videnouralism, other than the fact it's daft name.