Watch those recommendations for the CV

Looking for the next job, then just how valuable are CV recommendations? 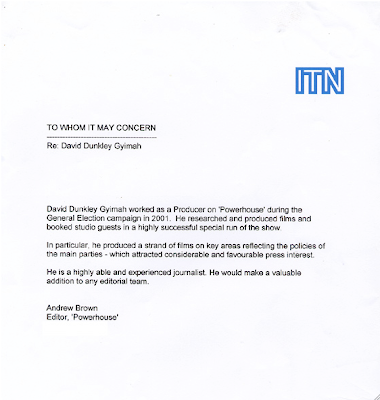 Steve emailed me. Came across a recommendation on Viewmagazine.tv and said given how things are, I should keep it quiet.

Well I don't advertise it, but hey there was a time when if you said you worked for The UK Prime Minister's brother, in this case, Andrew Brown, as one of his political producers that was a real kitchen-party filler.

What's he like? What's the goss in which I'd always say I don't know. The other name that stirs such comments is Jon Snow, whom I worked with on several projects during my 4 years continuing freelance work at Channel 4 News

Really nice bloke, Andrew, the editor of a show about politics who later move into Public Relations - one of the city big ones. And Jon Snow is just Jon Snow, no airs or graces.

His CV recommendation came at a time when I was making another transition, a new career. I'd tied up my last job as a full on broadcast producer or reporter.

It was great, but the broadcast industry is a small one, bound by sometimes what seems like masonic codes.

You're only as good as your last job. Your first job as a graduate may be a reason to celebrate, but it's the second job that feels like a bridge too far.

And then after your upteenth job, you find you're in no better position than when you started. Nothing is guaranteed.

This year media grad applicants for studies are said to be up, there's a crunch and jobs are being shed. It does not bode well.

I recently bumped into an old acquaintance. A once prodigious producer at ITN, who could keep up with the pace no more, the relentless meetings, the indecisions, and has thrown in the towel.

In his forties, he now drives a taxi and is retraining to become a lawyer. I so wish him all the best.

The new horizon in front of us gives new purpose for the digital journalist, the digi-native to colonise new lands, new openings.

But there's no reason why as a start-up journo or dye-in-the-wool, we can't think about being ambitious, about turning ourselves into that we can only imagine uber Journos.

As the VJ manifesto I've been formatting says, something that hasn't been done is waiting to be done.

Its theme also underpins an idea which good friend Rachel Armstrong a writer, multimedia producer, and general medical practitioner from The Bartlett has been talking about to a couple of think tanks in Norway.

Unlike a decade ago, your greatest showcase for work now is your online portfolio and the links and feedback it generates.

We live in far more interesting times now and perhaps today's recommendations, and I don't deny we're always need them, but perhaps we won't place as much much store in them as we did many years ago.
Posted by Dr David Dunkley Gyimah at 8:01 pm