Snow out London - 18 years worst ever from david dunkley gyimah on Vimeo.

It's the end of the world in London; school's closed, buses canceled, trains left in their depot, commuters standing idly around pondering their next move.

And as understandable frustration grew at getting nowhere, trying to talk to someone, somewhere proved equally futile - my mobile phone, and others received that r2d2 bleep, accompanied by "congestion".

I started the day 7.20 a.m wanting to sort out a membership issue with my gym. That took me away from the station in almost knee deep snow.

Matter solved, and no I could not have rang in for resolution, time to head to the local train station.

8.00 a.m and the roads were fairly bare. What signs cars did roam the roads was evident from the odd groove carved like fjords in which pedestrians competed over for firmer walking tracks.

"If you're heading for the train station, it's cancelled" said one elderly gentleman. Adversary has a way of bringing strangers together. 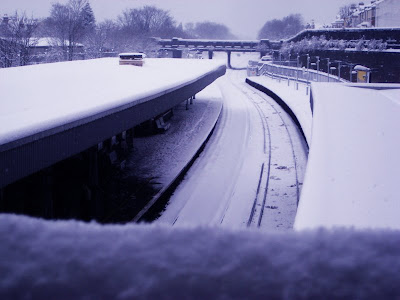 No Trains and no sign there will be any trains
But I had to take a look myself. It's not just the trains aren't running, the ticketing booths were closed and the sign hanging, as commuters cranked their necks, was unequivocal.

Making my way back home, an over excited pit bull made a beeline for me. Perhaps he had every reason, as his owner hauled him back.

With the amount of clothes I have padded on I look like Wookiee, Chewbacca, practising my ministry of silly walks.

A foot and half of snow brings London to a halt, if it weren't so serious you can only laugh.

The Snow piece, for a bit of background, was made off-the-cuff on my Canon IXUS 70, attempting to make my way to work. You know off to the station and back again. It took about 15 minutes to edit and put up.

One of the new areas of videojournalism is called “free-framing” where you shoot as a participant with little set ups. The snow piece is an example. You have the film in mind ans so shoot the "edit line". Chess Players do it all the time where they often tell you they can see as many moves ahead. This is really no different.

A lot of people have done this in the past but come from indie docs e.g Chris Marker.
Posted by Dr David Dunkley Gyimah at 8:58 am