The arc of film making in studios 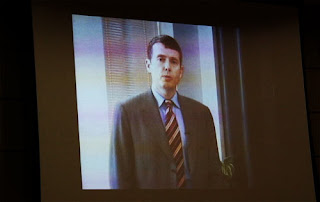 The video Journalism arc - the point of techncial film making...

Unless it's compelling and Obama's campaign manager David Pouffle touched that in parts when he spoke about how he ran Obama's campagn, but in truth unless a number of variables collide, film making in a studio is asking for trouble.

The guys at Ted Talks do a good job, but these are not acceptance speeches but ideas quickstepping on stage. And, they've workled the rehearsals. Other things, it's a multicamera shoot, so visually you're stimualted by the shot changes.

With sound, they're also plugged into the 'boom box' via their xlr jacks, so no compromise on sound.

Wemedia's setting offers some of the challenges, prevalent in many studio shoots. It's a venue to make participant's feel as comfortable as possible, low lights, curved auditorium - no blind spots and so on.

Conversely it offers challenges for video journalists. But I have learned from experience, so
first thing I do when I have a shoot is to scope out the room to eliminate or work around some of these variables, which is what I'm doing now.
Posted by Dr David Dunkley Gyimah at 3:17 pm