The Truth about Germans is they've rather gone off sauerkraut which is a bit like saying one day Italians will sneer at spaghetti, Americans will barf at apple pie and the Brits will call time on fish and chips.

Michael Wigger the man behind the series which pokes fun at the light and sublime - Germans can't dance - is the new kid on the block with the new comers award. His work added the kind of mirth needed for this years' celebration of video journalism.

That's solo video journalism- one wo/man band - and her distance cousin who brings in an editor and sometimes second camera to help.

"It's no longer this thing people laugh at uttered Sabine Streich, the awards' tireless organiser, who's notched up her fourth in 6 years this time in Mainz, but will no doubt take a hiatus as she's about to produce her own real-life project. 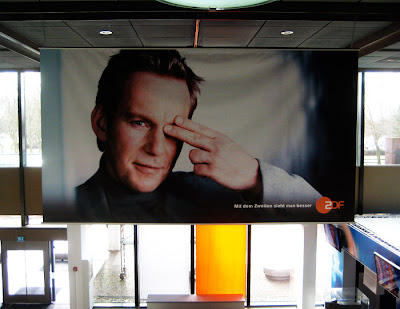 What's evident from the number of interviews I conducted is that Videojournalism is a big deal here, accepted by ZDF, their public network in the same gusto that the BBC had wanted to show its viewers before the governors pulled the plug on hyper local TV.

It's about story telling ultimately said the head of ZDF, but there are some stories that it comes into its own, namely one spine searing piece on an alcoholism.

Here a drunk ala "Leaving Las Vegas", without the glamour lives his wretched life in full glare of a camera and the frustration to near death of his family trying to help him, as he reaches for the nearest bottle under his desk is tortuous.

Gulp glug glug it's down, the whole gin bottle in one go as if it were water.

My own bit part performance involved handing out the award for the International independent division, a prize whose effects on my own career I know all too well from winning two years ago, reminded by the presenter.

The victor here, Frank, was a veteran radio, turned TV, turned Vj with a piece on Tuna.

More, a report using Southern Italy as a subtext for tuna fishing's woes, that is depleting stock, and the disharmony this may reap, when the community finds its dwindling catch destroying the cohesiveness of their community.

As Vj awards go, this year's compared to the one two years ago was a more intimate and compact affair; no cinema viewings and late night parties, but the truth is the Germans know how to show the rest of us what videojournalism's all about - even if they don't like sauerkraut that much anymore.