Video Journalism at a Cinema near you soon -Brothers in Arms 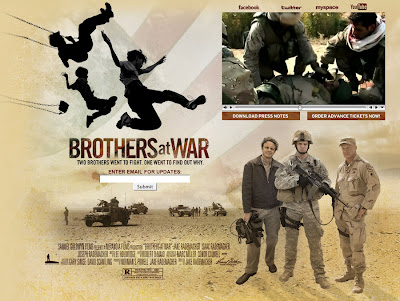 The DVCam holder on the left of this shot, Jake Rademacher (JR), belies the fact he made this film exclusively on a HD Cam Video Journalism style.

A cinema film like this made by a VJ may well be the norm in the not too distance future, but that's not completely the point here.

The impression is not intentional; it makes a great poster shot for his film Brothers at War.

Jake (JR) has an idea, to make a film around his two brothers serving in Iraq. He has no military experience, so he's up against it. The brass won't let him in, he's a first time director which also means no one's going to back him financially.

But he prevails. I have teased some bits from the press pack, and what emerges from the trailer is an intimate, and harrowing account of one person trying to understand what's going on in Iraq.

This is the stuff of Louis Theroux, but more personalised and without any of the trade mark Louis setups as Jake embeds with combat troops. And that's why it paints a picture of where video journalism could go.

Press Clipings
Take this section in the press pack.

Q.Then came the work of filmmaking?
JR: Yes, Norman and I secured final permission from the Army. We then had seven days to do all the pre-production to prepare me and our two cameramen ( Marc Miller Conor Colwell) to film in a war zone. I'm talking cameras and equipment, body armor, immunizations.

Everything. At one point, I was running to my car after getting immunized and a policeman was writing a parking ticket. Without breaking stride, I yelled, “Write fast. I'm going to Iraq tomorrow.” She tore up the ticket.

The quick turnaround is video journalism workflow. I imagine he shot loads, whilst a VJ would have been more judicious, but Jake would have still worked on the premise - "let the story unfold" and roll with it.

And when that doesn't work, situate the lens [ direct] in some dramatic scenes, dovetailed against compassion - the classic movie arc. That's the VJ way of working, the compressed time scale.

Here's another section from the press pack.

JR: I sent the treatment to my cousin, Mark Bowden who wrote Blackhawk Down. He thought the idea had promise and put in an introductory call at a couple of
production companies. At the same time my voice over agent at William Morris put
in a call to the reality division at the agency. Everybody passed, so I started to pitch
television networks myself, who while intrigued, weren’t too excited about sending a first time filmmaker into a war zone.

Q.What did you do?
JR: I hired a film school student who I thought had talent to come with me to
Fayetteville, and film my brother’s departure for his 3rd deployment to Iraq. Then we worked together to cut this into a trailer. Conor eventually became one of our
Directors of Photography who I brought with me to Iraq.

A college student?
JR: Yeah, I got him back in time to start his senior year.

So a college student shot some of the sections. That's indicative of the new Video Culture.

Whilst the film is called a documentary, a reference to the outcome, the work flow and process is indicative of the new hybrid between documentary and feature news, video journalism.

The four camera shooters including Jake is what's referred to as "VJ swarming" which is necessary in order to capture multiple angles.

But the ambition is clear. It may not be on general release, but for the flag waivers of the new video hegemony, this means something. Mind you, a caveat, some powerful backers come onto the project, but Jake still had to fight for this to happen.

I'll be talking more about VJ's future at SXSW where I'll be presenting on IM Video journalism, breaking the process down at how VJ is part of the new accelerated cinema phenomenon and how you could push the movement-image cinema feel. 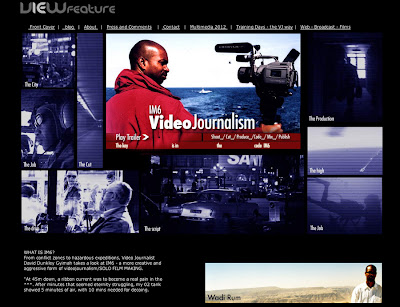 Just as you see here, and on viewmagazine.tv, the idea is for one person to be able to make the film, make the promo, build the accompany site, blog, SEO the articles and draw from other sites, make the multimedia package and the photos.

It's not uncommon for me to have AE, dreamweaver, photoshop, FCP, open exchanging files between them, each serving a different purpose of the IMVJ cycle.

It is not as complicated as it looks. In today's digital economy, it's one seamless work flow. Thus when you have four people with the same skills (the swarm, a military term in itself) you up the work ethic into a multi work flow pod.

In the case of Brother at Arms, his story making the film is equally engaging and could have been blogged/twittered, followed by clips that could have gone viral.

I did this as a creative working for Heavy weight boxer Lennox Lewis, releasing Flash promos of 224k that would download on broadband in seconds.

See you at SXSW, and if you're in Miami Wemedia Game Changer, lets talk there too.

WANTED - Open all hours Video Journalism from david dunkley gyimah on Vimeo.
Posted by Dr David Dunkley Gyimah at 7:27 am