It's a financial Time 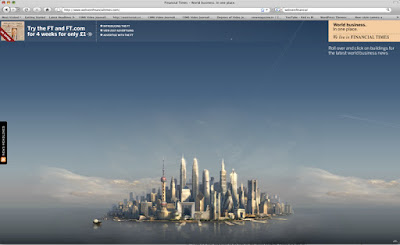 James Montgomery, who played a leading role in steering the FT.Com through its digital transition is to leave his managing editor's post for new pastures within the FT.

Personally I wish him the very very best of luck. You couldn't meet a more charming, pro manager.

I worked alongside James in training a number of FT journos in the VJ way and also managed to get a few of our student's work placements there.

You'll be hard pressed to find a group whose approach, courteousness, robust questioning and absorption in multimedia is a model for new journalism. 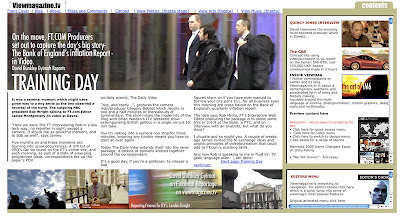 Ft article on Viewmagazine features video, which will be updated with controls shortly
The FT write up on viewmagazine.tv happens to be one of the most pinged, which led me to rethink how I might present some added value on the page.

That now will come in the shape of a lot more unpublished video, pictures such as these and including their first ever VJ piece and how that package was made.

Photomontage within the FT and some

One of scenes features Rob Minta, head of multimedia querying the City of London Police's decision to ask him for his personal details and then issue him a notice for filming in the city.

Rob handles it well. Later that evening I asked the Press Association's lawyer Mike Dodd whether this was acceptable. He sought clarification from the City of London Press Office and replied, "No".

More recently I invited a team of police to talk to our masters students and this issue came up again. But more on that in another post

New posting name
In thinking of a name for a new post, I came up with: "We live in Financial Times" only to realise on googling it was already part of the FT's brand.

But what I did stumble upon, I so absolutely love.

I have seen this poster [above], but the Flash form is sublime art, design meets commerce. A minimalist futuristic metropolis, which on closer inspection appears to be pulling in xml data.

So for the new write up on the FT, It's a FT time will be the headline and based on the poster I'm spellbound by I'll create something Flash-based for the new micro site.
Posted by Dr David Dunkley Gyimah at 8:08 pm