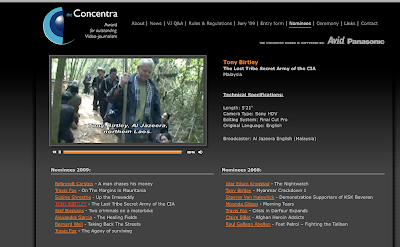 Video Journalist Tom Birtley was given a message by Hmong families to deliver to the United Nations.

To prevent the persecution and hunting down of them by the Laos government.

Tom's powerful video journalism piece does more than that. It delivers a message to the world.

If it wins the Concentra VJ Award which it should, his objective would have been served.

But it nearly came at a price. He says in his piece he came to expose their plight and instead they then decided to keep him hostage.

Having travelled through dense forest to find them, his personal safety at risk; if Laos soldiers had ambushed his group, he most certainly would have been killed, they ungratefully, desperately held him captive for a week.

This piece underlies a crucial aspect of video journalism, to eke out stories where crews would no doubt have trouble treading.

That said, a report on the desperate peripatetic Hmong has surfaced on Channel 4 before under the dispatches genre, but it does not diminish Tom's effort and his work.

Last year he was a finalist at the Concentra Awards with his Myanmar Crackdown piece. A thread is developing - a fearless photojournalist with a movie camera.

It rather reminds me of the work of Yannis Kontos, an award winning photographer many times over.

Tom is in stellar company, Travis Fox, Alexandra Garcia. Travis, an Emmy Award winning Videojournalist has himself been a finalist, but I don't think they'll begrudge Tom if he gets the gong.

This is exceptional stuff in its factual story telling schema, and a mint of-the-cuff piece to Camera.

And he gets to deliver more than a 1000 letters could say to the UN, a video piece of insightful information.
Posted by Dr David Dunkley Gyimah at 5:43 pm