Will 2009 be any easier on traditional media? 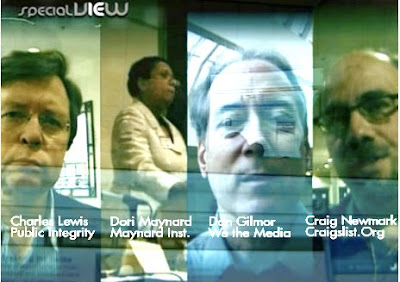 The title: Wake Up Call Can Trust and Quality Save Journalism?

The programme attracted some of the heaviest hitters in the business, whose names, though synonymous with the digital social renaissance back then amongst new media types, are today more common place.

It may not have seemed obvious at the time, but the public's flagellation over the news industry was opening up and news execs were now ready to tell the board: "Hey Bob this sales decline is no glitch".

Blogs were about to go critical mass, Flash would finally embrace video and video journallism would be adopted by the UK's first newspaper group, the Hull Daily Mail - a scheme I would be asked to look at.

After 6 or thereabout months online with Viewmagazine.tv, Guardian Journalist Jemima Kiss, then the news editor of Journalism.co.uk posted this piece, Wake up Call for Magazines and this, Online Journalism News - a site for sore eyes, that would come to the attention of Prof Witts.

Somewhere in July I got a call too.

media gathering
The conference lived up to all expectations and to hear in person some of the figures whose work I had admired for a while was the icing.

It also marked the beginning of me using my video journalism reporting skills introspectively on the new digital industry.

In any one year working as a staff Video journalists I'd roll of near 500 reports. Most of those covered a wide range of subjects, but few looked at the media itself.

Around 2000 the emphasis changed with a raft of magazine articles for the likes of Sony, The Producers, Creation Magazine, and Blue Print.

Writing for The Producer Magazine 2001, the role of video journalists reporting 9/11 was critical

New Media itself was undergoing its own revision. Some of the best innovative and educational publications e.g. The Production Show, Video Age, The Video Mag, were either defunct or being repackaged.

New Media was not so new any longer , it was rich and packagable as digital - ones and zeros.

The speakers, self effacing, spoke on camera, my old skool VX 1000, about what was wrong and how the future would shape up. The report itself included a prototype deep link from one video to another, and embedded video within an article.

Dan Gillmor's view:"It's happening because it can". Craig Newmark was looking for greater news variations, and Clyde Bentley likened the public's apathy to traditional media as a tiff that would resolve itself.

None of the aforementioned will be disappointed. But the broader question those years on is has the Trust returned and equally important are we passed the period of innovation?


Is it over yet?
The consensus from newspaper publishers is this new stuff is bedding down, the digital after shocks are there for all to see: twitter, video, google maps and the rest.

This hasn't staved of the depreciating trend. In the news at the moment is the Chicago Tribune, which filed for bankruptcy last week.

I too had a friend who was one of the early casualties. Now almost 15,000 employers are going through something none of them deserves.

Trust may be harder to quantify and a round up paper is therefore due from Prof Witts, but in terms of innovations, I don't think we're in any ways out of the trees yet.

Interestingly, there's a chasm opening up again between journalism and geekdom; they've come together albeit in limited fashion to help each other.

But if you broadly ask journalism experts, this is it, we're plateauing. It's the long road ahead. In business terms the seven year cycle.

If you ask the techs, the last few years have been the warm up act. The tools and code are toddlers waiting to grow up.

It's something the head of BBC Interactive at the time Richard Deverill said to us in 2004.

Back then working with a broadcaster, we assembled some of the best creative brains in the university and under the guise of News Futures, looked at social sites, moblogging, geospatial interactivity and where they would go.

"The students predict that the mobile phone will become an increasingly essential tool for journalists, with moblogging replacing digital video footage and blogging on increasingly sophisticated content management systems.

Students were encouraged to be imaginative but also realistic, said Mr Gyimah, presenting practical ideas and tools for journalists to explore in the next few years. But the push towards new technology, particularly take up of mobile services, will be mostly consumer-led." More BBC Hears the Future of News

So the question is will 2009 be any easier on traditional media?

The economic downturn will drive its own disruptive course. But will it lead to us digital beings becoming more innovative or will we simply batten down the hatchets.

Truth is this scenario in micro ways has played itself out and it'll take a brave Canute figure to claim it's over; the disruption and innovation is done.

In any case that's what I'll be looking at producing with a series of short films in the future.

Meantime posting real soon on the front cover of Viewmagazine.tv here's that report from San Antonio: Wake Up Call Can Trust and Quality Save Journalism?

What do you think?