The amazing Angela Grant creator of newsvideographer.com from david dunkley gyimah on Vimeo.
She's young, savvy and punches above the multimedia water line.

When I caught up with Angela Grant of News Videographer, I wanted to know how she got into the profession and her thoughts on how it was developing. 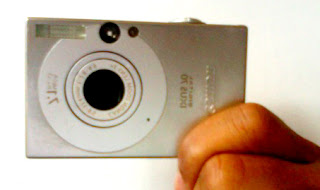 IXUS 70. So the lighting is highly saturated and the sound tinny in parts.

There's a bit of a misunderstanding when I reply to Rob Montgomery of Visual Editors, whether modest Angela isn't being too magnanimous about her past and achievements.

Video News
What's truly inspiring here is Angela's candour as well as her understanding and creative wrestling of video journalism and multimedia - from her site News Videographer, and training programmes she's given.

If you're a journo student, trainee, pro or manager, Angela brings a level of discourse to this new form, which sets the bar.

The following day I interviewed her on the Sony A1, which I'll dig out at some point.
Posted by Dr David Dunkley Gyimah at 2:03 pm

Thanks for all your kind words!

It's true, and you are inspiring, so the pleasures really mine :)
d