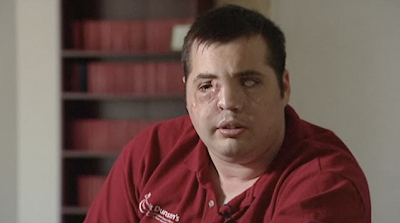 It's my old haunt, Newsnight, so I watch a fair share of the programmes in the week.

Yesterday's item called "Soldiers" was a superb piece of VT. Why men and women sign up to fight and the sacrifices they make underscored the programme.

Produced by Warwick Harrington and Jonathan Bell, it mixed classic black and white photography with strong narrative VT of three subjects back from the war.

The producers humanised the story: one well cut man who got into the paras, a woman who worked in classified, and a soldier who was snipered taking out a part of his face

What separated this piece from many others was the three's candour that even for veteran and seen-it-all presenter Jeremy Paxman, you could see he was moved. I worked on Newsnight in 1990, and produced/researched for Jeremy a couple of times.

I emailed the two producers soon after the programme and got a response; something I rarely do, but it deserved praise.

For many reasons, and not just because its good television it's worth watching; the tone is measured and there is a strong multimedia aesthetic to it.

Postscript:
Since writing this post yesterday I have watched the film again and credit must also be given to Julie Ritson and Frank Consandine - camera people.

It's a seamless production and makes me wonder whether the producers didn't have a multicamera director orchestrating an "as-live" edit.

Otherwise and in any case you still have to hand it to the picture editors Philip Clarkson and Anthony Shelmerdine.

This was a big production:sourcing the interviews, background pics, clearing with MOD, individual VT days with interviews at home and in cases at work, the finale with Jeremy, and possible some drop in shots.

But it was all made to look manageable.

A masterclass in packaging.
Posted by Dr David Dunkley Gyimah at 7:26 pm