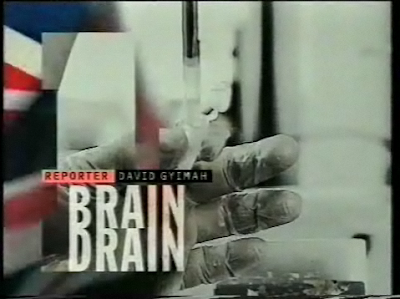 Recessionary times and how Brit youth were dealing with it - Tx BBC TV
Much is spoken about the hard times ahead.

Notwithstanding the econ crisis which is really yet to truly bleed in next year, publishers and broadcaster are already bloody nosed from the disruption of journalism's business model.

It's difficult to think of a way out.

In the 90s and the characteristic cycle of boom and bust, jam today, gone tomorrow, you could more or less read the signs and make contingencies knowing somehow there would be a recovery to recent levels ahead.

Many youngsters, irrespective of their profession, in the 90s moved countries. Falaraki was a favoured destination for casuals, whilst the European continent and the US became a one way ticket for grads.

It really was a case of supply and demand.

Recession 92
Here featured in The Brain Drain for BBC TV, my piece to camera/ stand up goes:

"People have been worrying about the brain drain for years, the cream of British youth leaving the country in search of new opportunities, but with the current recession is itreally a matter for concern ?"

These were pre-Net, digital days. Tom [post here] and Englishman who now works for one of Russia top broadcasters advocates moving East for those caught up in the Economic whirlwind.

Yesterday, I spoke of the tale of two friends. It is a young person's game. Everyone want's it free. And even when the economy recovers there's no cheer.

CNet's daily vid, below puts a voice and face to the woes. There's no hiding. What's the true value of journalism?

And when it does pick itself up from the floor, will it have been transformed to take on these various challenges, business model n' all?

Or will it be much of the same, bracing itself unguarded for the next financial onslaught?

Emily Bell from the Guardian saw the formation of Trusts as a model, though she could also see problems with this.

I'd be up for more conferences looking to tackle the elephant in the room. How do you stay afloat and make money to pay wages.


Posted by Dr David Dunkley Gyimah at 7:58 am

Hey I like your articles It is interesting.You should write in http://www.allvoices.com/journalism and this will give your article more coverage