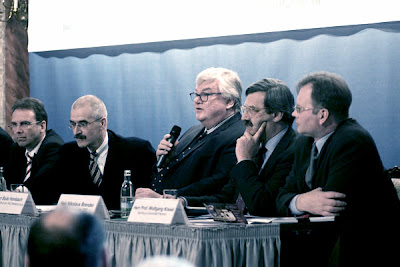 Image: news executives in Berlin discuss the virtues of videojournalism and the future of journalism on the web

Visual journalism, do you need training ?
Either way whether it's a one year or one week course you'll have to push treacle. Ultimately, even with the most inspiring trainer it's all about you.

A senior newspaper exec returning from DNA, the news event in Brussels, tells me talk of videojournalism and how well it's being executed was quite sobering.

Of course one of the recuring themes of videojournalism is how it's generally inferior to TV; it's been a big stick since way back when, though if you read some of the comments here about the UK's first and only VJ-driven station back in 1995 from industry figures there was then and is now light in the distance.

Critics do have a point, but the validity cuts both ways.

There are in any discipline talented beings and those found wanting.

Videojournalism stands in the locker room more naked because:

Posted by Dr David Dunkley Gyimah at 7:16 am

I needed this David. Have hit quite a slump lately questioning why I jumped in with both feet into this new paradigm.

I learned photojournalism by simply doing - no formal training. I loved every second of the profession and wish I hadn't left it back in the late 90's. Now trying to get back in seems like starting all over again. I sorely wish I could attend the VizEd advanced workshop in May but circumstances dictate otherwise.

Looks like I need to put my nose to the grindstone and just learn it as I did back in the day of shooting film...