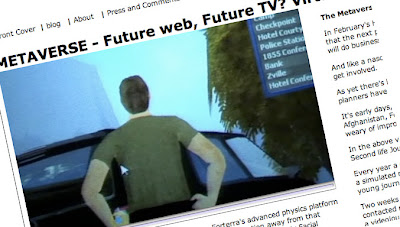 In this month's Harvard Business Review, Metaverse platfroms ie Second Life et al are crowned as the next phase of the web.

It's easy to chase shadows in this future where every day a new product and semiotic for the web, its participation and indeed story telling unfolds.

But the signs seem to suggest, if not so obviously, that 3d virtual platforms could expand the machinations of web functionality.

At the moment we may or may not be participants, but greater web speeds and a generation born into avatars and bebos may exhibit different attitudes.

Will you gather in a virtual world to watch films? Will a chunk of your income come from your alter ego living and breathing in an electrical medium?

The Matrix dared suggest a ludicruous future, which caught our imaginations nonetheless, but in Forterra's Oilve virtual system, where participants live in Iraq and Afghanistan modelled on real towns, accidents can happen.

Ron Brown, the European disributor of Forterra, got accidently shot during a training execrise and his his avatar violently hit the floor.

Attach sensors to the body and as Trinity would tell THE ONE, the body can't live without the soul or something like that.


Metaverse reportage
In the latest video on Viewmagazine.tv, I dig out excerpts from my days reporting conflict in Africa, West Africa and South.

In Ghana the US Special Forces are teaching Ghanaian Paratroopers low parachute deployment.

Paras jump at either high altitude or low enough under radars and open up their parachutes with minutes, sometimes, seconds to spare before hitting the ground maximising their chance of escape.

It's in military and emergency exercises where AUGMENTED REALITY, virtual world's like Forterra are gaining in popularity.

Next month in what might be a first and very trippy, I'll be in Forterra as a videojournalist reporting on issues that have an impact on the real world.

Exercises which Nato undertakes in its annual war games, which I have reported on also feature in the video package.

There's a lot of material I have had to exclude, but by next week I should have the template for a hypervideo package.

Will metaverse really rule the web?

If you can afford it find out from Harvard Business Review, otherwise, here's my uncompressed version of the video on viewmagazine.tv