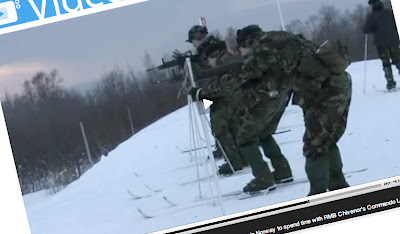 This week I showed you what Gareth in Cornwall was doing- a format which has his bosses excited.

Today, I'm bringing you an exchange and video from Catherine, from Devon, whose path I also crossed.

This is her first piece on a very difficult shoot - a training excercise in Norway and I'm thrilled to bits for her.

She's gone straight in at the deep end, going largely handheld - which is advanced videojournalism and also she eschews the reporter's v/o instead threading the elements together.

This often means, you have to shoot-to-edit on the fly.

Great use also of nat sound and the piece breathes you; and she's cracked the metronome of the piece, which is one of the most difficult aspects of visualisation and editing.

Well you take a look and perhaps you'll join me in the chorus that says, newspaper videojournalists can do visuals very well - it's all in understanding the grammar and breaking those rules.

Hello David,
Remember me? Anyway, I have finally been able to do my first two videos which are at www.thisisnorthdevon.co.uk

The first is Norway and I also did one Bakery Secrets Revealed which is in archive (left hand menu under video). I'd really appreciate any feedback.

The Norway one was fun - I only had one day, a very rushed day from pillar to post, with no time to plan. I hadn't realised how hard it was to a) move in snow quickly and b) get close ups when they were firing and made me keep back!!

The only tripod shots were the CO interview. Still - see what you think!

Catherine, I mean this in a nice way, but I could marry you. Very very nice. Couple of things you've done that make this exceptional.

your first videos..
you've gone largely handheld - the gonzo approach
you've adopted the observational doc approach - based around the Guantanamo piece. Hence no voice over.
Some strong sequences...

Nothing wrong with the shoot and you prove a fundamental point about you as a newspaper journo turned VJ that you understand visual grammar.

You'll only get better.

Remember the aspects of narrative movement: lens, inside the frame, music etc.

Next time to heighten the senses use the lens as the third eye, so in military/emergency operations - you can push in to the subject. It doesn't matter if we see you hitting the deck with cameras wobbly, the viewer knows where you are and that there is an operator behind the camera and a sense of urgency.

Did I mention the zoo effect Chris Moyles Radio one, where his assistants don't have to creep around the room: we know they're there so any noise.... any sudden movement with your cam is tolerable...

Fabulous all the same. I'll take a look at the other.
Posted by Dr David Dunkley Gyimah at 9:39 am