3.00 am and I'm just rejigging an edit from a video I shot on a videojournalism training project in Beirut.

The video provides a privileged view of how one major independent newspaper, Annahar is pushing ahead with videojournalism.

In many ways the concepts and thought bubbles at this paper are not so different from what I have experienced training in the UK, specifically a substantial number of regional newspaper journalists, the Telegraphs superjournalists and the Financial Times to name a few.

They're all emotive subjects invariably splitting views, and passionate ones at that. 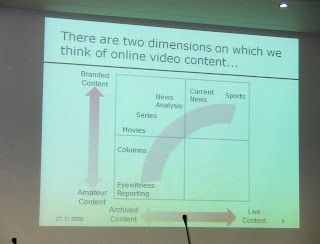 (slide from one of the speakers whilst presenting in Podgorica)

But in the value added conversation there's always one question which comes up again and again. How can I be different from television and different from that other group there?

Because videojournalism's basics are such a low hanging fruit: put the camera here, shoot according to the rule of thirds, don't shoot into light, that after a weeks training, you could quite easily train others.

Fact is those that come to the Press Associations videojournalism training programme often do. Saves the company on multiple fees and many have indeed been successful training other staff.

But while the chords on a guitar can be easily memorised, jamming into a session when someone like the late Buddy Miles kicks in a drum beat takes a little more doing.

Comprehending the different approaches to the components of videojournalism, in say filmmaking such as Iranian Abbas Kiarostami to Bollywood, to news reportage of Ed Murrow and modern day less disciplined soliloquys is crucial.


The Creative Art of Videojournalism

Videojournalism is a creative art and is by no means a one-size-fits all and it's also a body of sharing, otherwise the disservice is cloning everyone to be the same.

By all means for someone starting out, here are the basics, but if your intent is to find your own identity swiftly, then it is the trainer's job to help you find that.

I often cite in my lectures with Masters students, "the wisdom of crowds" and thus at some point soon, the independence that they try things, which in turn spur new threads.

Essentially improv, testing my ability to find where they're going and make a contribution to that.

"OK that's very mimetic of Elia Kazan in East of Eden playing around with angular composition and space" or " OK the visual intelligence of stability plays a huge part in trusting you, so looking confident and smart pays off".

These however in the end are all choices, journeys of dual discovery, so I often call training regimes an exchange of ideas, because no one method if sacrosanct and even the best of rules awaits to be broken.

What's need in videojournalism training is the same thing I'd say for any other self expressive art.

It is the notion of helping develop the actor's voice, the videojournalist's eye, the confidence to be exposed to an array of goodies - from directing, producing, voice overs, editing, post producing - all core skills for broadcasters.

But videojournalism begs for more from TV broadcasting, so requires that bit more work. What's needed in videojournalism is the opportunity to work with the very trainers who can enrich your existing dialect.

It takes time. And truth this journey for news auterism is still in its infancy.

What's needed in videojournalism is...... you know the answer by now.


David Dunkley Gyimah has been a videojournalist for 15 years and worked in the media since 1987. He is a Senior Lecturer, Artist in Residence at the South Bank and researching as part of his PhD Videojournalism's creativity. He's looking forward to his first open videojournlism session being planned for the future for two days.
Posted by Dr David Dunkley Gyimah at 4:55 am