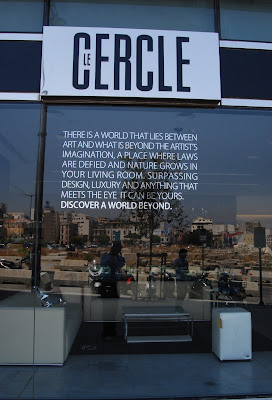 "There is a world that lies between art and what is beyond the artist's imagination, a place where laws are defied and nature grows in your living room. Surpassing design, luxury and anything that meets the eye it can be yours. Discover a world beyond".
Pic taken by David in Beirut

A combination of free framing and visual gut instinct - is what it boils down to - when constructing stories on the hoof.

Sometimes an innocuous image may carry significant value later in the film process. It may not seem like driving an F1 ( far from it) but the process of quick thinking and rethinking is required to fashion a narrative, when at face value it's nothing more than a closed event.

This is one method how David goes about creating videojournalism films. It's part a mimetic art, part muscle memory from one's past, he says, but the key is to capture the "sign-sentence"- which David has been developing as part of his PhD thesis at the Smart Lab.

A lot of brilliant film makers I know find it difficult to explain the process. Not the physicality of say the rule of thirds and crossing the line, but the kineasthetic and its phenomenology.

That's the part I'm interested in the same way for instance if you place four people with no apparent relationship together, as I did three weeks ago lecturing to a group of Chinese University students, everyone automatically starts making symmetrical groups out of them.

You have to ask yourself why this is?

Videojournalism and Artistic practice
David has been translating the surface art of his work into areas such as:
This year he commences an artist in residency at London's leading cultural and arts centre and Europe’s largest centre for the arts, the South Bank Centre.

Previous residents have included Orchestras such as:


And artists such as: Bellowhead, Cape Farewell, Shlomo, Lemn Sissay and Rahayu Supanggah.

David runs viewmagazine.tv - which is an example of IMVJ - which is his labour of love. He has trained or lectured extensively in places such as Podgorica, Montenegro; Norway, Chicago and Miami and recently in Beirut- where he's completed a videojournalism film about videojournalism.


Posted by Dr David Dunkley Gyimah at 9:33 am