The Videojournalism Timeline & What next? 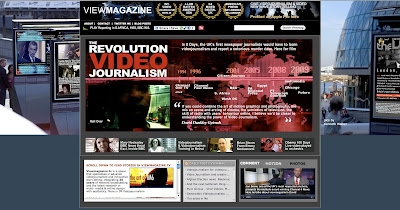 David's timeline of Videojournalism from 1994-2009 features films he has made since that period or features about that time that give some indication of the change in Videojournalism. Here
The Videojournalism Timeline: in 1994 it was a revolution. I can't tell you how excited I was. A Beta camera, Vinten tripod, Senheiser mikes etc.

You'd find us in the middle of Oxford Street, the camera on its tripod reporting live back to the studio, having informed the Satellite truck of our location.

We did something that the industry sneered at. No one would hire you post 1994 if you said you were Channel One TV.

Birth of a station - Video Journalism revolution from david dunkley gyimah on Vimeo.

I left after two years, not because I'd fallen out with it, but wanted a bigger challenge. I went to WorldWide Television News. There I learned a different craft, but after a year knew that agency work wasn't for me. 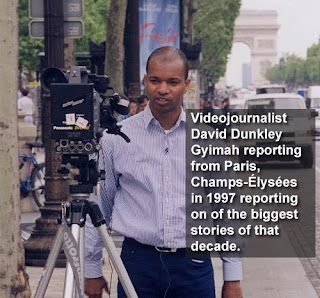 But it taught me well. From the BBC in 1987 (TV and Radio), to South Africa ABC News and the BBC World Service, Channel One and now WTN, I may not have known it but I was picking up workflows, practical ways of doing things that you could only know from being in these organisations.

Because along that path you're likely to bump into /get taught by the most amazing producers and execs e.g. Tim Gardam editor of Newsnight), Joy Hatwood (multiple award wining producer, Radio 4) etc.

From 1994 I kept my videojournalism skills going. When I joined Channel 4 News, undoubtedly the best news/ current affairs programme in the UK, there's really nothing like it, I put my Vj skills to use.

Similarly, I travelled in and around Africa helping to set up networks. In 1998 I bought a ticket to fly to New York to buy my first powerbook.

How mad that seems, but it was cheaper there and I could now start to edit my own films. Jon Snow, the presenter of Channel 4 News was amazed, when he asked whether this laptop and software could replicate the quality of Network TV.


A new era
In 2000 I wrote an article that brought me to the attention of the BBC who had just outbidded Channel 4 News to bring in Michael Rosenblum - the father of videojournalism.

Rosenblum must surely have Had the last laugh. I attended their inaugural meeting in Birmingham and kept my contacts going, till in 2004 the idea was floated by the Press Association whether I could introduce a programme for print journalists.

In 2005 that programme was launched and the Hull Daily Mail became the UK's first regional journalists to successfully embrace videojournalism.

There have been many breakthroughs since. Not least the wonderful time I had in Beirut or presenting in Montenegro, talking at SXSW and teh World Newspaper Forum.

There has been in my eyes a massive shift in videojournalism. In part it's the curiosity of trying to better a process that for me is 15 years old.

In a lengthy conversation with a publisher I mentioned some of those which I have written, now buried in the indexes of this blog. We're now in the throes of writing that book, in tandem with new research from my own PhD programme.

I think it would be fare to say I love video and journalism and when the two collide, there is a new stellar arrangement which mutate and asks news questions.

The art of videojournalism is now absolutely nothing to do with multiskilling, in the same way Alice Guy-Blache, an ex secretary directed, did visual effects, painted back scenes for her own films. And this was in 1896.

The semiotics of videojurnalism is reflexive auterism for a medium long found to be wanting when it comes to change. Crassly put it is "total media" for it calls upon the the use of a multiplicity of media skills.

Videojournalism -Let go
Some are less obvious. Take radio for instance. As a medium it fires the imagination like no other. In videojournalism, learning how to use the microphone and acquire good sound is one thing, knowing how to write for radio and TV and understating the nuances of the two and voice is another.

It took me many years and many visits to the now defunct BBC Training Unit to understand.

The point we're at now is an interesting one. We've not yet reached critical for a paradigm within this art form to take place, but the debates we're having, the events we're attending where we talk and swap notes is the effect of the Phoenix from the Ashes.

Ashes because others that have come before us have made what's possible now. But are we really pushing as hard as we should?

Next year in conjunction with my work as an artists in residence at the South Bank I am looking to pull together a number of events that contribute to the work others before me have laid. I hope you can be involved.
Posted by Dr David Dunkley Gyimah at 8:08 am