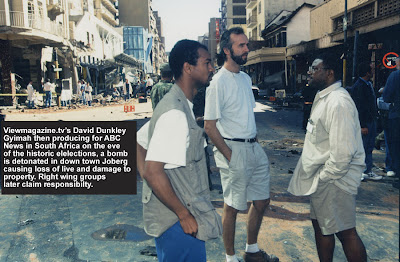 Reporting and producing about violence in South Africa 1994. Contextual reportage is called upon.
The Afghan incumbent apparatchik would rather foreign networks did not report on violence at the polls. They have a point. Now before I accuse my alter ego of naive stupidity, it goes something like this.

They want people to vote, so want to black out the violence . It could scare voters away.

Agencies and News orgs say the public has the right to know. The accommodation is somewhere in the middle. Reporting what's happening in the polls but in a sensible way.

Take this as an example. If I put together a report on who likes Chilli Peppers in my family chances are I'll find a lot of people. However the default position of my vox pop must give weight to a different opinion, so the minute I find someone who doesn't like Chillis, like me, et voila, I'm on screen. This creates an erroneous impression.

In other words if you're reporting on atrocities, report on all the others, at least with the use of graphics to inform viewers whether the violence is endemic or localised. 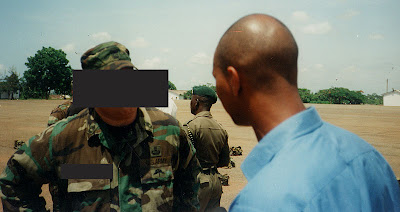 David videojournalism reporting from Ghana on Ecomog Forces being trained by US Special Forces prepping the West Africa forces before they see action.

The killing of anyone is to be condemned.

Is there a way though, if, or when these atrocities do occur, media networks find a way to contextualise what's happening geographically et al. That as much is a needed addition to the timeline of reportage.

Schism
There still exist a wide schism in the world to the role of media and even then in UK media sometimes unusual things can happen, such as the news blackout on Prince Harry fighting in Afghanistan.

I always recall stepping into the cauldron of South Africa reportage before the official end of apartheid and to my amazement realising a lot of the violence being reported was localised.

As a news producer I could with a degree of certainty look for it, whilst other citizens blithely went about their day lives unaware of what was going on.

I guess with the Net et all, graphic interface news could do a good job at referencing THE NEWS in a more 21st century way.
Posted by Dr David Dunkley Gyimah at 3:12 pm