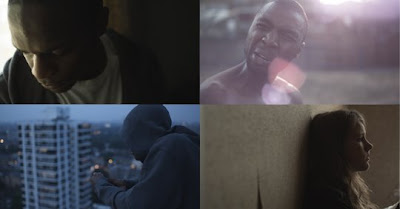 Fear/Love is a new short film I(Rob Chiu) have been working on for the past couple of months. We recently completed a hardcore 3 day shoot using two Red One cameras. Currently in post production Fear/Love is a story of identity, fear, and self destruction. Written and directed by Rob Chiu, produced by Lincoln Waldron with an original soundtrack by Ben Lukas Boysen aka Hecq. Coming Soon!

You know I'm really pants. I mean I do the odd thing here, then mix up something there and have a rest. Then I get a call from a friend, who's shooting his first short.

Last week we sat down at the South Bank as he showed me the rough cut. I-am-pants.

( you mean you liked it then?)

The story's profoundness is all the more, er profound, because more than enough directors, commercial makers of videojournalists having a stab at depicting teen angst, drugs, crime, get it wrong.

There are half a dozen on Brit TV at anyone time or even posters in Brixton that play on clever wording and imagery, but in reality, they're made for the suits and accountants.

"You see here teenager, that is a gun, and that is drugs and when you mix the two, you get into trouble, go to jail and your life is trully ******ed"

But the very audience it's intended for watch 1 sec, smell how numpty it is and miss the message.

What Rob Chiu has made is something more deeper, less dialogue, a play on ifs and maybes. There is no constructed message. It is ambigious. You're unclear to the point that you start painting your own demons.

But every scene is recognisable.

Rob: Hey David are you on then?

So I shot the behind the scenes of the making of this story and soon, when he's cut his final version, we'll mix it up. But I'm hoping I can persuade him to show you the cut first.

And if you don't like it, I'll give up videojournalism.
Posted by Dr David Dunkley Gyimah at 9:15 pm