Where next for video journalism - just marvel over this

In the last write up on viewmagazine.tv, where I ask what next for video journalism, I talk about investing in more high end prosumer gear, such as the EX1, some prime lenses and grading software such as magic bullet. 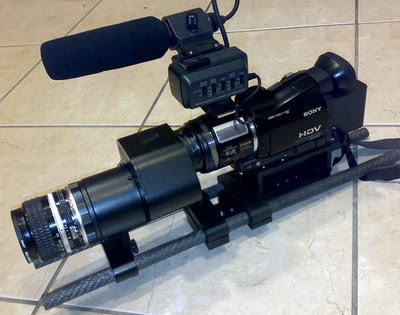 The Sony A1 gets the job done and with a lens rig/support ( see previous posts)or/and working the high end of the zoom for shallow depths of field you can do some nifty things such as the promo on viewmagazine.tv.

But if you're graduating from news to longer news features docs particularly on TV and cinema, though you'll also see improvements online with an understanding of bespoke compression, then you might want to consider something like the E1/E3 which shoots 24p - effectively as close to the subtlety of film and those amazing depths of field.

Begs the question why use the A1?

For the E1/E3 Philip Bloom, film maker , DP and editor makes the case far better than I could with this reel drawing out rich saturated colours and then speaks about the E3.

If you're going down this route there are a number of plugins et al you'll have to download for FCP to read your .mov files. Small matter really!

Now where was I? Oh yes watch and enjoy. Then 2 videos down have a look at Rob Chiu, an old mate, and see what he does with a 900 dollar DVCam.

Hillman Curtis and Tarsem are also a must if you want to see aesthetic video in play.

The point here is whilst the camera is crucial but it's the cinematography and editing skills of both Philip and Rob that puts them in a different place; that third eye being able to see things we'd probably miss.

Where next for video journalism?

It's early days, but there will come a point when onliners will become more discerning as others raised the bar, and if like me you once struggled to get a 120X90 pixel movie playing on a 28 k modem compared with full screen today, you'll get my point.

In the mean time watch and delight.

Only thing is I'm not shooting round the clock at the moment to buy one. Studies etc you see!

But one national newspaper I consult for did ask what I thought.


Reel for Sony from Philip Bloom on Vimeo.


The Ronin and Devoid of yesterday

Posted by Dr David Dunkley Gyimah at 12:10 am

David - don't you think going to this extreme of using a Letus or Redrock really begins to go outside the boundaries of VJ'ism? This looks more to me of shooting indie feature film type content or commercials - not shooting vj work.

It's really why I say where next?

Just as most of the VJs I started with back in 1994 have gone on to extend their knowledge in film, TV etc, I reckon quite a few VJs now after they've mastered the quick turnarounds will be looking to make the odd or more longer feature.

Depends where your threshold is, but in our case after shooting and cutting some 500 stories in a year, many of us wanted to do something more out there.. and this stuff I talk about takes you there.

Won't be for everybody yet, but there's a grey area of videojournalism and film making approaching - trust me on that one :)

There are a couple of posts here somewhere in which I talk about this grey area; the Claudios of this world being one of them.

I take it you mean Claudio Von Planta ;)

Yeah - I can see for those who have done this day in and day out that they would want to try something different - me personally I'm still trying to wrap my head around shooting this stuff in the first place - ie; coming up with story ideas or having a new perspective on one that's been done already - I admit - I have thought on more than one occasion recently of just going back to stills - but that would be playing it safe so I keep pressing forward

The EX series is great, and the EX3 should be a real improvement. However, they are far from rugged. We have had three bite the dust (literally) in Afghanistan already!

I have got one of these on order. when it arrives I'll give you a call and we can have a play