Reporter catches Bullet- perils of reportage and then video journalism

The footage of a Turkish reporting team under fire covering the Russian-Georgian conflict is as dramatic as it is terrifying.

Reported on television one of the crew sustained a bullet wound to the head. It has since been reported on sites like Current.tv that he has lost his sight in one eye.

That the crew managed to keep the tape rolling is highly commendable and will no doubt serve a purpose in training journalists entering and evading trouble spots. Note most of the bullets were aimed at driver height hitting the front windscreen.

Staying on Current.tv one viewer makes a plea with current.tv's vanguard crew to be careful whilst covering international reports.

It's a message the Committee to Protect Journalists drives home on its site for anyone with the intention of reporting a story in hazardous areas.

Given the dash to video journalism, and increasing use of we-journalism what's often overlooked is safety, which leads me to think that the old paradigm of giving students practical and theoretical knowledge about media reporting could do with an overhaul.

To some extent we already do that with our NATO war games and soon I hope to post what will be a long format doc of footage seen below.


Safety or glory first
I'm reminded of several stories which capture the perils of international reportage produced as a feature by CNN - well worth a look.

I also recall my own memories of working the townships, a young wanting-to-impress reporter signing a death warrant 2x; once entering the murder capital of the world then, Katelong, and then going down a mine shaft, one of the deepest and considered riskiest.

On a trip to Sun City, at the artificial border between South African and Boputhatswana, I got into a tense exchange with a border guard and here (1994) in this clip below I have entered the world of hatred and violence between political rivals: guns available for 20 dollars carried by young people sometimes aged 11 year olds.


Most of the things I did then, I'm not sure I could do now; that's the power of youth and invincibility.

There are times when nothing can be done to help:wrong place and time, but if you follow Martin Bell's ( former foreign correspondent - and one of the best) advice of not turning your back on the action, being aware of your surroundings and that no story is worth the ultimate risk, then you increase your chances of returning home safely.

Of course some stories put you at the heart of the action. Who can forget Rageh Omar, but Rageh, an old mate from the BBC World Service, will be the first to talk safety.

We bumped into each other recently and save for how busy he is at present, I hope to talk to him again about reporting in troubled spots. 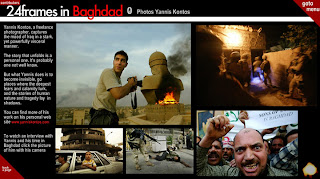 Whilst it would have been unlikely in the past for new graduates to become front line reporters, without five years experience, that isn't the case anymore and video journalism comes with a whole new set of problems- one which photojournalists and camera crews share.
(Award winning photojournalist Yannis Kontos in action some of the world's trouble spots.)

At the BBC's launch back in 2001 I spoke about city trouble as a lone reporter with a camera.
One evening returning to my car as I enter ted the Cul de sac I was met by three young men exiting my car with tripod and tapes.

They spotted my $60,000 beta camera and their body language asked the questions.

Camera or your health?

Don't be silly, I thought there's only one answer for that: I chose the camera and barely escaped without a bruising.

Funny though I kept the tape rolling. What's with that!

I duly raced to the nearest police station to show them the footage.

Their response: go home mate there's nothing we can do.

I guess its high time safety and risk reporting became more of a feature on courses training next generation journalists.
Posted by Dr David Dunkley Gyimah at 12:32 pm