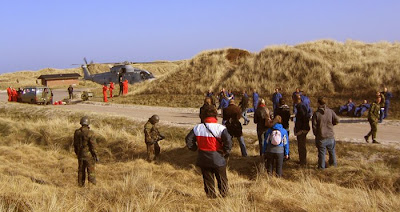 An evacuation in order, with fake refugees and real special forces soldiers. Meanwhile just out of shot, a reporter has her walkman on oblivious to the intent of the exercise.

It's when 2 events rub against each other so incongruously that you get what might be satire and Full Battle Rattle (FBR) certainly does that.

US military let a production team make a film that at times is as uncomfortable as having your girl friend's mum hit on you, or the dad for that matter.

Read the Director's statement to get a better sense of their motives.

But it's not so surreal after all.

In the Nato War Games exercise (pic) above I recall some equally peachy moments:


I don't think I'd have it in me to parody, what we did, but FBR does provide a blanket to explore.

If I ever do cut something from the hours of footage, I might talk about , though no pics, the story around Naked bar - ( still have to pass it by our press minder).

That's what you shout apparently when you want the Brit Marines, well the lads we were with, to go in the buff during RandR.

It's all a bit of harmless fun, but a word of warning though, if you make the call, you've got to strip as well.

And yes, a woman reporter who will forever rename nameless made the call.
Posted by Dr David Dunkley Gyimah at 12:43 am