After a career in Video Journalism- options Part II 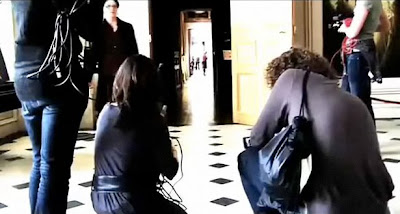 In the summer of 2007 I discovered something extraordinary from my interaction with regional journalists - a story now folded into my PhD studies.

Two journalists from the Express and Star in Wolverhampton in the midlands had broken new ground by being the first dedicated video journalists for a newspaper.

It may be a moot point if you worked at the New York Times or Washington Post, but for a small family-owned regional newspaper employing journalists, not to write any copy for the paper but only shoot film was unheard of.

Victoria Hoe and Andy Toft were exceptional learners in their ability to pick up and return ideas with interest.

Being a ground-breaker comes with a cost though, not for the practitioners, but the host, the newspapers.

So it was no surprise that months later, in Victoria's case from an email I recently received, both had left, been poached by, get this, Television.

Carp all you want about television's handicaps, but like moths drawn to light we all gravitate there; the prospect of having your film watched on the box, is still intoxicating. Welcome to TV's lala land.

Up until the mid 90s, the corporation offered some of the most enviable training schemes for its staff. It still does, but at a time when competition for BBC places, any TV place was tough, when Satellite TV was in its infancy, if you had BBC training you might have considered yourself extremely fortunate.

If it didn't work out for you, or you considered your producer wage to meagre, the independent sector beckoned and you became invaluable - a bigger fish for a relatively smaller pond.

Some programmes, like Reportage - arguably one of the most stylish and innovative current affairs series on British TV made by young people for young and 40 somethings, was an on-air training school.

Risks were taken, no autocues allowed in some cases going live, bosses pitted strong headed young journalists against directors - all this adding to the allure.

Almost every single person in the room I sat with in Reportage 1992 is a name in British TV.

But then the BBC's renowned brand of training, its coveted recruitment of 12 trainees stopped.

Risk became averse, shows had to succeed, the director had forcibly relinquished control to the non creatives - production manager, exec producer and accountants.

If you're a producer reading this, you'll know just how difficult it is to produce something of note one minute and then argue to the point of tears to carry the next project.

The industry knows how to play good cop, bad cop when there are many talented people around.

Chris Crammer, formerly BBC boss, then CNN was alleged to peer into the distance of his office and murmur :" Brr it's cold out there" as a journalist tried to argue a case for more money.


Video Journalism's new Economy
There are parallels with the new economy in Video journalism.

Many newspapers are training up staff, some are astute to introduce binding clauses that keep the VJ at the station for at least a year, before they can flap their wings and fly away.

What are their ambitions? What happens when a newspaper calls it a day? Is it time to head off to TV

Video journalist has partly created its own Frankenstein; it shouldn't have, but there you go.

Unlike TV's division of labour which makes working within it aspirational: researcher to Assistant Producer to Producer/Director, if you're a VJ, you're a VJ.

This can be a good thing if you're as impatient as me and would want to gouge out the eyes of the next producer asking you to make photo copies or pour them a cup of tea.

However, the converse is that the glass ceiling is an inch away.

In my case in 1996 when I left Video Journalism for WTN and then C4News, I was only too glad to move on.

The Cameras ( betas) were too heavy; the tripods ( Vinten) weighed as much as a calf; and the batteries were the size of bricks.

Anything to get away.

Today's gear obviously is much smaller, but the regime and how accommodating it should be hasn't caught up.

At Channel One, we had video producers - a layer between the VJ and Output who were schooled in the ways of brilliant conventional TV, and thus many VJs begrudged when it happened how their films were tampered with.

Or in some cases they were not given any feedback at all.

The VJ revolution comes with a lot of baggage. Tomorrow I'll look at what Video Journalism could do to avoid some of the past TV pitfalls and why one wo/man's VJ is another wo/man's complete tosh. A point that misses a huge point.