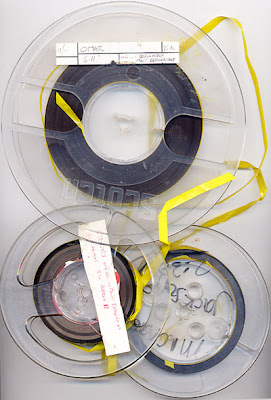 From this above to this below, the mega fantastical Roy Ayers Ooooh

Recent finds in my garage of Michael Jackson, British singer Omar, Roy Ayers and the Stones.

Rummaging through some old boxes and suit cases today I was amazed to stumble upon hordes of 1/4 inch tape reels.

My first reaction was to reflect on the the days of analogue recordings: Uhers, MkII desktop, Marantz and the like.

My second reaction was OMG as I started to read some of the labels:

The Stones at Brixton; Omar in the Studio; Louis Farrakhan on the phone... it went on.

I'm a self confessed lab rat. I mean show me someone who's interested in the media who isn't.

So I'm known for hoarding the odd magazine here, an article or tapes there.

My studio has an assortment of D1s, D2s, Beta, Digita Beta and Super VHS

And then there was last Christmas when I finally did away with 400 magazines into the municipal recycling bin.

Many of then were at the forefront of digital and design and set some foundation for my interest in digital media: editions of Creative Review, Video Age, American Cinematography circa 1995.

My find today has some interest because I'll be able to share them, but also because it sets up a conversation around archiving.

What do you know to archive and how do you go about doing it?

For one thing, in spite of the near tape less society, I still fancy tape for the moment.

I can't tell you how many laccies hard drives have given up on me and even though I back media up and back it again, I have still been caught short.

So tape is a good back up for the moment; I'm sure digi formats will usurp this arcane thought in time, but for now at least I'm only purchasing G-drives.

For the behemoth companies into archiving, their solution is hire a department head.

The BBC has just made a director of archives appointment, recognising how important in the digital age archive truly is.

No, correction! Archive is crucial!

There will be new students going into journalism, some of whom will be unsure about the context and even events of September 11th, let alone the Bosnian War, Second World War and so on.

By the way if you mention 911 as opposed to September the 11th you'll likely get an overwhelmingly better response.

So, soon after September 11th, I started ringing around friends who worked in the media and were able to help me assemble crucial footage on that day.

I can't show you because it's copyrighted to some company - a bugbear in itself as it SHOULD NOT - but that's for another post.

Students get to watch it, with no commentary, no nothing, just natural sound.


The tao of archiving
Events of such national and international importance make their own case to be stowed away.

But what about events around our personal lives?

Unless we adopt a "Truman Show" approach What motivates them being archived.

But it is quite something to have a conversation with non-news friends and tick boxes for them at how important something they've done, or about to do is, and thus should be recorded.

In part then archiving is about understanding what news is, its value and context and as we turn into a matrix of shooters, the semiotics for news or subject's of interest alters.

What's on Youtube may not interest CBS, but it drives a small nation of videographers wild with excitement.

News is in the eye of the beholder and those beholders are today more discerning: ITN news is finding that out the hard way, even when it "tent poles" huge audiences around the news.

If you're planing something that's a first, or has some contextual relationship with something closer and it pushes the boundaries, then that may have wider interest.

Quite often news revels in showing an item because it has some of the sheen of being the first and crucially there's evidence on tape. " Hey Bob we're climbing Everest and this time we're going to take the East Face".

Ping ! There's your news item with stunning pics to boot.

In many cases as NASA discovered after its lunar landing, space flight was not that interesting any more to the mass media so said the media, until yep, you've seen the movie too.

They could have figured the only people interested would be John and Jane - self confessed science buffs who's parents worked on the programme. But then that's not the case at all. 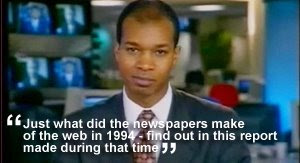 Picture right of David reading the news and introing a news item on how newspapers are taking to the web in 1994. The Times is pleased it ahs 30,000 viewers!

8 Days the story of the UK's first regional newspapers practising video journalism was of little interest at the time I made it.

Yeah it's a dinky film, but then no one could have told us in a few years time we'd be doing cart wheels for video.

But 8 Days did have the hallmarks of an archival event at least for my records: these were the FIRST newspaper journalists in the UK doing this thing.

This was going to be the FIRST time real police would face them and no one had any idea what to expect.

Sometimes, many times, I find myself shooting, knowing all too well there's no story, but there are interesting visuals and "hey here's one for the archive".

When I threw all my magazines away, a friend filmed me at home. The relevance? A future film when I could start to talk about old media saying bye bye.

In San Antonio or various states I visit, I get into an exercise of just shooting B-roll, GVs.

Then there are those stories that time yield more fruit over time.

In South Africa in 1992 I interviewed a 12 year old for a series "Through the Eyes of a Child". ( Must repost this at better size)

She was delightful, precocious and forthright and easily spoke for a generation.

Today she will be almost thirty and what I wouldn't do to track her down one day and re-interview her.

I don't know that I have got the time; but it's there and at some point will make sense if not to anyone else, but me, contextually.
Posted by Dr David Dunkley Gyimah at 11:29 pm