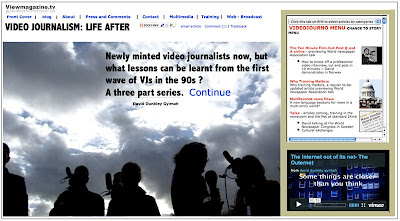 Video Journalism Life is a series of short snappy articles on viewmagazine.tv, which in houses some rare but interesting video e.g. 10 mins clip of the doc "Birth of a Station", which tells the story of Channel One's launch.

Below is some more information about the pages and some of the build techniques behind the videos I mentioned last week. 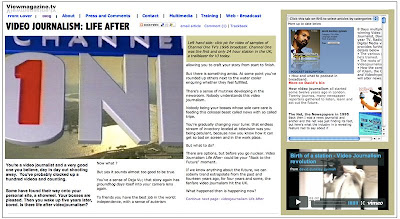 This is a broadcast from the 1st January 1996. I'm presenting and reporting is video journalist Jon Gilbert, now a network reporter for ITN.

Both would be using a Beta 100 camera. You'd be hard pressed to know they shot and did everything themselves.

The language is very much VJ for TV: 3 shot ratio, the camera is steady with the action controlled within the lens etc, but done extremely well with stand ups/ pieces to camera.
Advanced video journalism takes account of camera movement. That is non verbally I can intimate the feel and mood of a scene by the way I shoot you.

Last week I spoke of how VJ then moves into doc, film making; more on that in just a minute

Embedded Video
The page uses an example of embedded video but with a stronger aesthetic ( which I spoke about at the Batten Awards here at the National Press Club in Washington DC. I'm still highly indebted to those that gave me such an illustrious platform to share my thoughts.
* the video report I made at the awards is here

Click the pic and you load the FLV with controls behind. You'll need Flash CS3 to perform this function because of some of the actions scripting and once you either flag up or indicate to the reader there's video, they'll click, that is if they want to :) 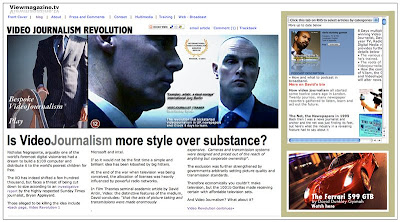 This page also uses embedded video; the previous page shows a personal time line of video journalism aligned with projects I have undertaken including national and international station building projects.

In 2000, Washington Post Travis Fox's piece of a construction-worker father grieving the death of his son from 911  is an indisputable strong indication of video journalism's strength at doc features.

In fact you might argue some talent have become digital film makers with a news bent.

Is that skin to video journalism? Either way does it matter.

The award winning Molly Dinnen sets up an interesting discourse. She's a film maker with the medium of film. Is she a video journalist, if she carries a DV Cam?
I'm playing with semantics, but it's worth a moment of thought as a massive new wave of video journalists emerge. 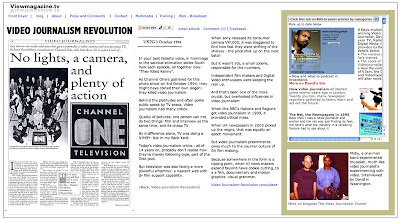 No lights, a camera and plenty of action - an article from October 1994 about Video Journalism on British shores, with contributions from a range of figures e.g. Nick Pollard whom two years later would be headhunted by Sky News to become their head of news for a decade. 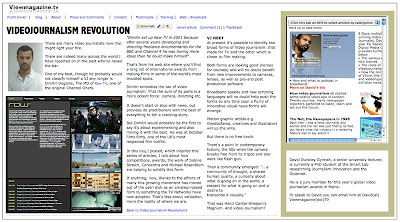 Fig 5
Dimitri Doganis was one of the original Channel One Video Journalists and at the time one of the youngest at 19, I think.

Today he would likely not call himself a video journalist, for he is a multiple award winning doc maker and executive producer.

His films for TV and festivals you've probably seen: The Siege of Bethlehem is one of my favourites, a film which captured a global audience.

If were to ask Dimitri how influential Video Journalism was to him, I've some idea what he would say. He'd likely say TV presented a different discipline and it helps to be around collaborative thinkers, but his overall understanding of the work flow and multiple disciplines was lit as a vj.

If like the scores of good producer/directors I know now in TV, you have a VJ background, you'll more likely to use their techniques to enhance your output. The most obvious is giving cameras to your subjects and trusting what they'll come back with.

If I were working as a producer/ Director for any outfit covering the Georgian- Russian conflict, I would be offering basic training and handing out cameras to residents.

I'd also have had engineers attach sensors to modified cams which could be offered to camera operators in the field, who could place them at strategic view points.

In the future I will look at how new technology in cameras e.g face recognition and remote cameras will strengthen video/ video journalism news.

For instance, I have recently been told that the BBC is developing a camera that can withstand extreme temperatures and be remotely controlled to film in the Antarctic etc.
Posted by Dr David Dunkley Gyimah at 8:38 am