If those sprawling three-minute YouTube clips seem to drag on forever,
Filminute, "the international one-minute film festival," might be right up your
alley. Wired Magazine online

Glitz and celeb watching is one reason why any Network would want to screen the Oscars, a deal with Oscar permitting of course, but the prize of a global audience is an elixir not to pass over, particularly if you've been losing eye balls over the years.
So if you're an exec, here's your chance to do something. If you're a punter you too have a role to play, though if you wanted to submit a film, you've left it a teeny too late.

The Filminute: the international one-minute film festival a festival of full blown one minute films springs into its finale in September; submissions for the event have just closed and from speaking to one of the organisers Sabaa the standards this year are way high, so it should be quite a fest.
There are many 60 second film comps; I have known a few since 2000 working in Soho London, but with this executive directors John Ketchum and Sabaa Quao have amassed some admirable attention. 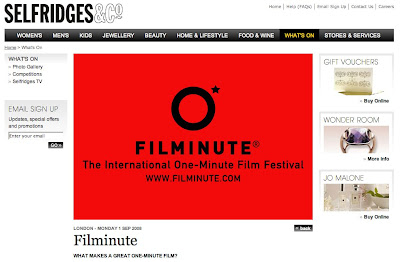 Frankly if you're a broadcaster I'd go bite off the hands of Sabaa and John and get involved.

Sabaa's asked if I can do a few video journalism driven news shorts, which sounds fun; s0 I'll re post any updates in time.

But as a side thought a 60 second VJ piece as an entry might have got you in the final 25, which become available for you to vote a winner in September.

More from their blog and site