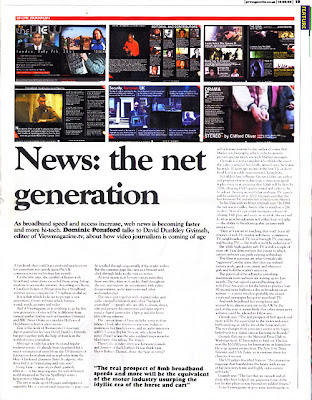 Probing conversation with Zoe, BBC, this morning; it was a time for my routine stock take anyway - so I went into declaration mood.

I do on occasions know how to get myself into trouble by flagging up red capes.

Nope that's not one of them, more being a good Chancellor doesn't make you a good Prime Minster, as PM Gordon Brown is heaving to hear from some of his back benches.

Did I tell you I once worked for Gordon's brother Andrew; really nice bloke (idiom, top man) two elections ago. Gave me a glowing reference.

The stock take: "Well it's a magazine, but with video and it does this and a bit of that, wheeze", I said.

Dominic, then dep editor of Press Gazette understood the gaps in my breathless talk.

New Statesman offered its own sage words with viewmagazine is better reserved for science fiction; it's too busy and I'm lost said the reviewer in so many words.

Both Dominic and The Statesman used Minority Report to make their case, One man's meat....


Back to the Future 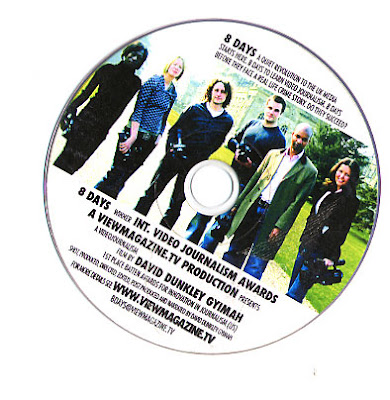 Couple of years on and what do we have?

Stagnant flows with all the creativity taken out of us, or bags of reserve as we move into phase 3 of the web.

What ever the media now know, which you wanted to yourself is now in the open.

I dunno, but mostly all my colleagues have been lending a hand via their immediate response forms when we're giving our presentations.

You should try this; scary but fun. 15 -20 minutes to explain in laymen sans dumbing down terms what it is you have and what you're doing with it.

An array of firm, but fair comments back which can only be grease for the mill.

So onto the summer and conference season and a reminder to myself that whatever was ripe couple of years ago has fallen of the tree, dispersed and that new ideas, associations, the "do something that scares you everyday" might foster more rigorous ways of alt-story telling
Posted by Dr David Dunkley Gyimah at 3:09 pm