Boasting twenty four screens, is it the multiplex cinema of the future - the screens are all in the same room - or an endeavor in giving new meaning to artistic cinema?

"The films you are about to watch were made specifically for this screen" said Professor Haim Bresheeth, Director of the outfit, Matrix East Research Centre, which houses this multiplex, adding "if you're wondering why you're sitting on the floor that's because there is no prescribed way of watching the screen... we're still experimenting with the form".

And then eight shorts made their stand at EVA London 2008.

The film makers, some of whom have travelled from as far as Canada, varied widely in their styles; the audience ranged from preteens onwards.

At times we fixed our gaze, our line of sight intersecting with others.

Otherwise the film makers had a trick or two which forced us to one of the many screens.

Jana Riedel, a film maker and documentary maker based at the smart lab was hailed by Professor Bresheeth as the best film to make use of the form.

And I agree. There was a rubikness about the narratives folding inside and out of each other with various screens playing supporting roles to each other.

Jana has some new ideas to go a stage further. Watch this space, er screens.

It culminated in a series of atomic explosions, giving Jana's piece a run for its money.

It's impossible to be too deterministic or even dismissive about this form - Sony have thrown their weight of support behind the venture.

And consider this thought: cinema is barely a hundred years old meaning hypothetically if you're grandmother had never been to the cinema in her life, she'd probably find one screen as exciting or equally baffling as twenty four.

You could argue that with the advent of painting or even the zoetrope, we've been accustomed to fixing on a single perspective point.

Equally you could argue in our multisensory, media age, we're forever stealing a look here, shifting our concentration there.

If you're a teenager you'll be able to testify to how many times your mum or dad have told you to either turn the TV, radio, computer, 360, off as you bone up on the next day's exams.

We've become peripheral sight-beings; we always were, but it's any wonder we don't have eyes around our heads. That's a job for evolution.

I have got six screens in front of me, though only four tend to be on at any one time and they're not all playing at once.

In 2001 a colleague and I attempted this multiscreen narrative, The Family, which you can play here, which was a finalist in Channel 4's Unleash the Talent mixed media competition, and led to a commission to write up the concept in Blue Print that august architectural/design magazine. 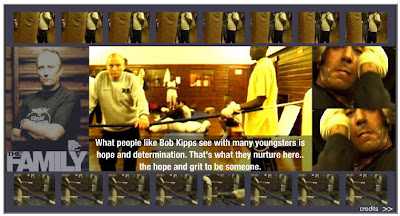 The Family, a finalist in C4's mixed media comp. which led to work with boxer Lennox Lewis

But I can see how a Rashomon (羅生門, approach to film making could have some currency for the screens. Yep I too have an idea, and if you have to you're encouraged to get in touch with the unit here

post script: Big shout to Tamarin Norwood and Taey Kim, both Smart Labbers, and all the other artists for their films and a good night out 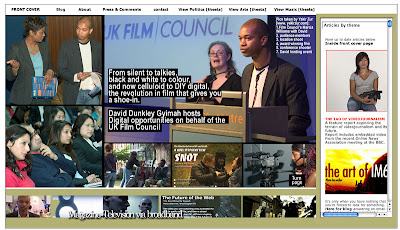 Posted by Dr David Dunkley Gyimah at 6:14 am