Multiple Video Journalism Reporting - 6 ways plus BBC and beyond from david dunkley gyimah on Vimeo. 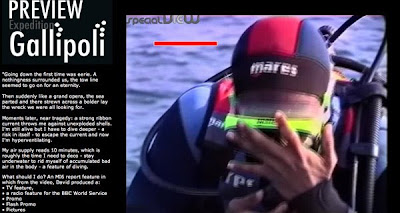 Future reporting 6 ways. Here's one amazing adventure of a story from my archives 1999, dissected five ways and what I would do differently today . 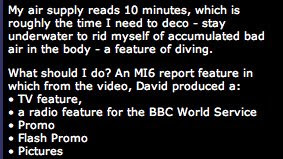 It was an extraordinary voyage. Ten days out to sea on a live aboard searching for a wreck, HMS Majestic, with a descendent of the Commander-in-Chief of Gallipoli and a crew of professional and serious sport divers.

My own drama included a near serious accident miss 40-50 metres down being caught up in a ribbon current and hyperventilating.

I almost ran out of air.

We found what we believed was the wreck in a series of day and night dives - the first time the Turkish military authorities had allowed us into the DMZ (demilitarised zone). There were still active shells.

The result of that report was deconstructed 6 ways: