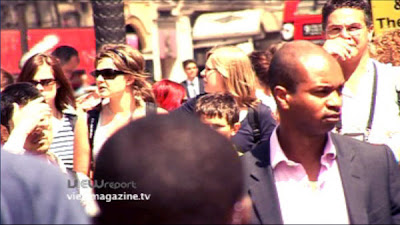 Scene from Digital Diversity and Communities

"if you want to know about water don't ask a fish"

At no point in their life cycle will any media outfit profess to not know what's going on. They are all, at anytime and place, in brilliant shape.

Before the advent of web 2.0,they would tell you we're doing well thank you and now pretty much the same.

But no one has a monopoly on ideas and even occasionally the most revered companies fall behind the times.


Ideas - where are they from
Some Execs attend conferences, others media gatherings, sometimes you hear inspiring people and some execs invite you in for a chat and take out notebooks - it's happened to you as well huh!

And then there are fantastic PhD Programmes, which I'll post about soon, which play out McLuhan's dictum about fish.

When I had the idea of embedding video into a page with key rich text wrapped around it seemed so obvious.

So obvious that I could actually build it and test it out. This is the original Viewmagazine.tv and you can laugh at my howler.

It is surprising how many basic occurrences, so called "norms" are never questioned, because well they are the norm.

Monet once said, he wished he'd been born blind and then found the ability to see so he could appreciate more the colours surrounding him.

For viewmagazine.tv I got the idea from Minority Report (I tend to get a lot of ideas from design and films) and found it really amusing when the UK Press Gazette previewed the site and said:

Four years later at an Online News Association meeting recorded on viewmagazine.tv under the Tao of video journalism, the BBC released figures declaring embedded video worked and then the National newspapers hit on the eureka moment.

No, no this isn't about me and smugness, which is crass in itself;humility is a rare but necessary quality in this business. It's about attempting to understand the timeline of past events and how the trend extrapolate to the present.

What some strategist might say- is a Sun Tzu approach

New Ideas?
So what might be some of the next disruptions to come along, that will add schisms to this already agitated news front?

1. 3 D web - Metaverse
The web as it exists today will be like hieroglyphics for a new generation. Greater processor and bandwidth will give you the capacity to enter a web very different to this here and the way we connect the dots: cause and effect will matter fundamentally.


2. Video Hyperlinking
I have been able to cut my first all video hyperlinked video featuring Al Jazeera's Riz Khan and designer Ozwald Boateng. Just as links give you value, a video hyperlink will strengthen you video package.

Two problems! Firstly, will outfits want to provide external video links?
Secondly, how will video hyperlinks affect the exposition of the news package, because oh yes it does something to the video.


3. Negative space
With billboards, the web, the bus, all festooned with all manner of information, you'll be looking for negative space to help you.

Just as you retire to that study, shed, your own room. So at some point they'll be a backlash because as creep sets in, we'll keep on adding asset after asset until the notion of choice itself is difficult.

So how do you cleverly design in Negative_space? What were you looking for in your chill out room because there's a correction on the way