For ten years he was at the helm of Rupert Murdoch's flagship Sky News enterprise. And in those ten years there has been much change in Isleworth, home to Murdoch's brand on the rim of London

Among them, the network has massively boosted its web presence and the floor of their news production truly is like stepping into something out of Deep Space Nine.

But we're in Central London today and two years on from leaving Sky, one of the most sought after editorial jobs, but one in which Nick Pollard jokingly reminds himself of a story that: "No editor should be in their post for more than 10 years", we're swapping stories on news and journalism's future.

Correction! I'm doing a lot of the listening, before I reach for my A1 Sony Camera to record a quick and "dirty" interview.

Dirty because, my battery is all but drained of power, so I'm prohibited from any set up shots for a location or prepping the camera for fear it'll fizz out on me.

Nick's in good fettle, but for anyone who's not seen him in person or within the pages of the industry magazine, "Broadcast", the beard might come as a surprise; indeed I almost didn't recognise him.

He is an affable man, and an editor who regularly debunked the notion that journalists are the sole harbingers of news, by welcoming anyone, cleaners etc to his news' conferences.

But that's not to say he has firm views on the role of what we might call the traditional journalists in these grey and morphing times.

And in spite of my new media credentials and charge of the citizen journalism brigade, I'm nodding in agreement about the architecture of journalists' news making.

The Perils of First Strike News
The late Charles Wheeler, one of the most venerable journalists of his time and praised for being one of the best UK TV correspondents ever raised a similar point with a cadre of senior journalists in 1997, as 24 hour television was taking hold.

The turn around in news, the agility and swiftness required is so consuming that there's little room for analysis from journalists.

The implication that it potentially increases the risk for not quite getting it as right as one would have hoped.

Nick's point echoes this in an environment where the stakes are much higher; every news website, blog is fighting for a scrap of attention and everyone is a journalist.

"I agree with Nick Davie's and his book Flat Earth News about the explosion in outlets in news, comments and observation", he says adding, "the decline in the number of people gathering in primary sources, and a lot of people don't realise this, that the number of journalists in newsrooms is declining, the ability for news agencies to collect news is declining as well because of pressures on staffing".

"There is", he continues, "a danger that news gathering falls while commentary and reporting from armchairs and in front of computer screens increases exponentially and that's something that I think everybody who's interested in the sources of news should be aware of".

We move on to the future of the web and news.

Should a website's composition be more televisual or keep hold of its characteristic texts output?

There are pros and cons for both: SEO indexing versus rich screen multiplatform content.

And we also talk about the BBC's move towards local community news.

The model of Channel One TV, Britain's first VJ station, in which Nick was the managing director, was 10 years ahead of its time.

It ceremoniously whittled away unable to get any financial-returning penetration with its dependency back in 1994 on cable.

Nick posits a different thought whether any new station could sustain itself in today's market saturated with news for which the advertising cake is more than divvied up amongst existing players. 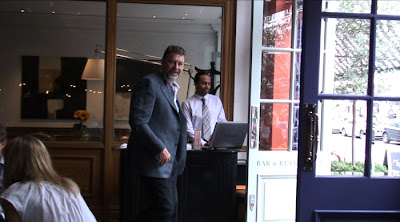 After an hour, it's time for his Nick's next meeting.

No less busy I think.

Eye brows raising he talks about his new projects and recently returning from India, divulging his 40 years of news experience that includes Sky, Channel One, ITN, newspapers and others.

" Projects, projects", he smiles, "fascinating exercise, I was there helping an Indian enterprise set up a 24 hour news station. India by 2015 will be the biggest lucrative news market in the world, but the competition there is absolutely ferocious".

Editors never die, you just don't hear about them in print.

A 3 minute video interview with Nick will be posted shortly

Posted by Dr David Dunkley Gyimah at 9:50 am