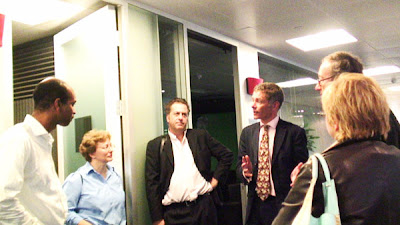 The Daily Telegraph shows David and group around their studios with a fascinating Q and A from delegates. David will post that feature in the future.

On my way to WAN to talk about video journalism, a post that wraps up a broad project I have been building.

Video Journalism is about 14 years old in the UK

That much you would have gleaned from previous posts here.

And it's had fits and starts launches elsewhere, but unequivocally it's the long haul now and the ghosts of video journalism 1994 are causing real havoc to economic business models.

So here's my time line, with accompanying clips on Viewmagazine.tv. Click the words e.g. BBC, below the date time line to activate video clips

Posted by Dr David Dunkley Gyimah at 10:21 am