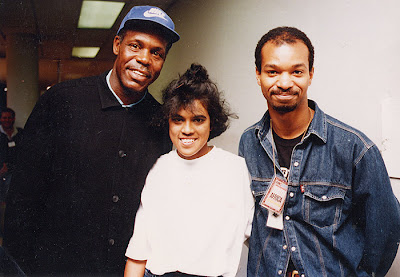 Six years on from the 1988 Mandela concert, I was in Johannesburg among other things as an Associate Producer for ABC News working as one of the producers with Danny Glover

Note added: 26th June 2008 The response to this post Nelson Mandela Tribute Concert 1988 Wembley -BBC Report has been overwhelming. Thank you for the interest you've shown, which has prompted me to set up a section in viewmagazine.tv which will feature some of my related work in the region, such as an interview with US Composer musician Quincy Jones and the First Time Voters series.

I was two years into my career as a radio journalist freelancing for BBC Radio Leicester and just about to complete my undergraduate studies in Applied Chemistry.

What would I do with myself?

Nelson Mandela, the great mythical figure was coming to London; it was his birthday, but it had also been billed as a pressure concert, a campaign to bring Western leaders to their senses about apartheid.

It would be another 6 years until that transformation would occur, when blacks would also enjoy full citizenship and be able to vote, or visit cafes which until then were designated for whites only.


What a gig
A huge concert with every conceivable star had been laid down for Mandela, or Madiba as he is affectionately known and I had a press pass to cover it for our station.

To say it was daunting, overwhelming, mind blowing would be an under statement.

Jesse Jackson wouldn't answer a question during his press conference unless you id'ed yourself.

I thought at the time, what's the fuss about?

Mandela's salvos were interpreted by commentators as a dig against PM Margaret Thatcher.

Britain's Prime Minister had resolutely objected to sanctions against South Africa during its apartheid regime. 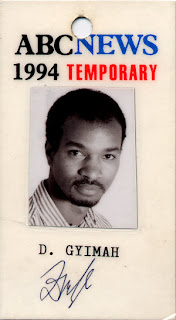 If you were there, I don't have to say anything.

The music was brill.

The report for BBC Radio Leicester is a bit tinny; I'll have to locate the master file one day, but this gives a memorable account of the day Mandela came to London, to celebrate his birthday, 20 years ago.

Four years on I would be in South Africa reporting from the townships, witnessing the last vestiges of an inhumane regime.

Nine years on, like so many who've had the pleasure I would meet Mr Mandela; fleetingly, but memorable once again for a ground breaking programme we made in bringing two sets of journalists - from South Africa and Ghana together - in a programme called the United States of Africa.

But this post is for that concert, which will no doubt be matched, even outdone, with Mandela's 90th birthday party.

Talking about South Africa, I have finally got down to locating the files and reports on Africa's Apprentice, so watch out for that. An extraordinary programme in itself in which I got a group of people together to watch and then ring the producers up and question them in Johannesburg.
Posted by Dr David Dunkley Gyimah at 12:05 am