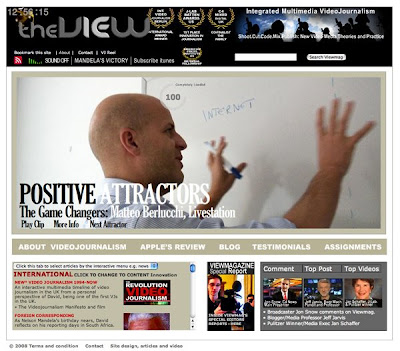 The conclusion to the day's previous posts to follow, but a few issues to juggle in the air.

One of the nicest things to come out from Viewmagazine.tv has been the chance to meet innovative individuals; people with this aura which leads you to steal glances at them, whilst they're not looking.

They ignite a spark, a passion, a something often undefinable around themselves and others.

The very nature of the web means ever so often a link will come in which I'll drill through to find an incredible person or organisation at the end.

There are countless; you know that yourself.

A sight detour first: my younger sister, an incredibly innovative children's teacher is one of them, a Patch Adams.

Once when inspectors came around her school to monitor her work, she left the classroom only to appear minutes later with a swimming mask, wig, flippers and a cape.

A couple of weeks later, one of the examiners reappeared as a teaching assistant and was so keen for my sister to do something out of the ordinary again, BUT this tme he wanted to be part of it.

The children in her class, just fall to bits, then she goes into her teaching plan.

Late in her career, she decided it was time to go to university. Whilst there one of her friends complained bitterly at trying to keep up with studying and looking after a child.

Joyce, teen-looking, who did not miss classes, leaned over and whispered: "I have got five!@%£^&*&"

That was the last time, she says her now best friend every brought up the subject.

I can't help but weep through joy and laughter when I talk about my sister Joyce, even now.

The three people featured on viewmagazine's front page are inspiring in what they're doing in different ways, but the end sight looks the same - something that little bit or a lot out of the ordinary.

Posted by Dr David Dunkley Gyimah at 9:33 am