How the web ruined me - long live the web. A conspiracy !! 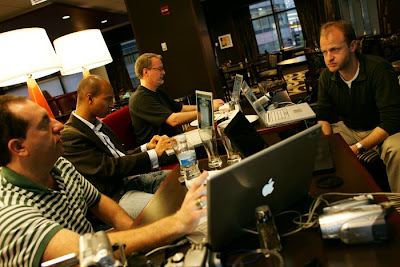 Media makers in Chicago networked up using stick cam. Pic by Ryan - link to be added

What were they thinking? But did they have a choice?

You're gifted this thing and told you can have it. It's free.

You ask what's the catch but can't find one.

The catch, you'll no longer have control.

Then you laugh. Not possible, Never!

If I were a conspiracy theorist, you could brew the simplest reason for Berners Lee creating the Net and giving it away for free.

"He was tired of hierarchies' control, he wanted to set people free." A Morpheus pre Matrix. Wishful thinking!

But it's brilliant. There is no such thing as a free dinner.

The very distributive model Berners Lee designed to make the Net work, to ensure one document could talk be pulled up on any screen, computer speak to computer, has now infected every walk of profession playing on the net.

You no longer have control, and the more people that use it, the less control you have.

It's taken nearly two decades for business to finally realise they're now paying for that free lunch.

The smoke screen is even more interesting.

Everyone offers a solution, but there is none. If anything it lies in human behavior. What people want they'll go after, so you'll either adapt a business model to this, or be one of the "people" to understand what you and everyone else wants.

Everyone's losing control. Some business are big enough to sustain serious blows to their health.

The beating is a wake up call; they regroup and figure out what everyone else knows. "IT'S NOT ABOUT US, ITS ABOUT THEM".

PLAY BY THEIR RULES".

The BBC, like most massive organisations presents an interesting case.

The last bastion of its control is a commissioning process, but its I-player and other stats/traffic tells it what people want.

A couple of years back I interviewed the BBC's Director General Mark Thompson at a time when the perception about the BBC was figuring out how and where to wire itself into the new media Matrix.

The DG knew what awaited. It had suffered huge fallls in numbers. The type of dip that would cripple many companies, but like the US troop surge, it cushioned the "what", redeployed and threw its weight around this new new thing.

It's not rocket science, but when you're a huge institution using public funds, you'll want to be abs sure how and where you're spending people's money.

Today's conference satged by the BBC at Alexandre Palace about the future of the web et al, shows the corporation's new confidence. " It know what people want and wants to lead by example again".

That's quite something because large corporations lead by their own example. They hire clever people to do clever things in-house, many times eschewing what's out there.

If it was good enough, we'd have it, they could argue.

You can't breath today without finding a conference offering you the latest thinking.

But the web's only a teenager. Where is the next big disruption? What will the next big change be? Will we be ready?

You'll get all sorts of feedback, but there is no constant.

Correction. There is one: that we'll lose more and more control and that being nimble, small, acting swiftly, assimilating and experimenting will be the order of the day.