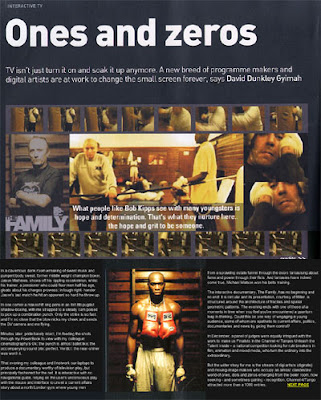 Piece from Blue Print Magazine on the future of digital media, the digiratis

In Soho one of London's creative central hubs we called them the Digiratis.

They were artists-in-residence, at home, in the classroom, often non professionals.

Before there was video journalism, there were video artists.

Salvador Dali, Peter Greenaway and their ilk; but it didn't start with them.

And all to often they (journalism and art) collide and produce something wonderful - artistry with a bent for saying something real to the artist.

Great cinematography, documentary with reconstructions and drama does this

Video Art Journalism
We could trace art film to a disputed point in our contemporary visual time line and Wikipedia under Art Film does a good job, though it omits Georges Méliès (December 8, 1861 – January 21, 1938), a stage magician who mastered artistic film making - a true original digiratis (below).


The digirati movement I capture an essence of in the article above: Ones and Zeros for that august publication Blue Print magazine offers a brief insight video innovators who have shaped an alternative video journalism movement - one you may not have be aware of. Here's a snippet:

"Television and film’s yearning for new talent and the holy grail of formats and new ideas produces a perennial round of in-house think tanks, yet outside the industry’s highly structured environment lies this veritable alchemic media community, experimenting with form and shape, talking a language that marries technology with creativity, strategy and delivery"

The skill using a camera and doing everything in the hands of journalists is seen as video journalism, but it has much, much wider connotations amongst the arts and artists.

And here, somewhere is it. The painter with video as both brush and medium breaking conventions and coded rules to produce a body of work which is uniquely theirs.

It is their creation, their creativity, their auterism and it often strikes a public chord, sometimes yielding degrees of controversy.

And when both art collides with journalism amongst the digiratis, we see the creation of form and montage, heightened in programmes such as After Effects, Combustion, motion and 3D studio Max, with results that can be as unpredictable as they can be wonderful.

So you see it might seem absurd to label video journalism as purely factual story telling, for the beauty of the video really does exist in the eye of the beholder.

The question is whether you consider yourself an artist, journalist of even both.
Posted by Dr David Dunkley Gyimah at 9:24 am