View mag - back to basics 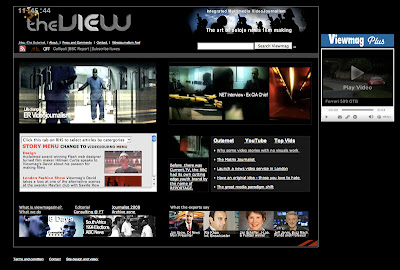 When it was first launched two plus years ago, it looked like this. BUT it was built in flash - and so was losing valuable SEO indexing.

Now I have taken the site back to it's original format, but strengthened the coding with CSS div tags, which should make it more easier for browsers to read.

The original concept, which was picked up by the UK Press Gazette in 05, is also resurrected.

And the colour, well black divides many people; its a closed colour, but does give some leeway to the idea of magazine journalism so users are expecting daily updates, as opposed to white which is instinctive in news paper journalism.

The Gazette then wrote this:

"Using View - now on its third quarterly edition - is like stepping into the sort of hi-tech world imagined in Steven Spielberg's science fiction movie Minority Report.

The site is made up of 64 pages and organised ostensibly like a conventional magazine - pages can be scrolled through sequentially if the reader wishes.

But the contents page also acts as a browser with click-through links to the various stories.

As your mouse icon hovers over pictures they burst into life, often with audio. And throughout the site, text reports are interspersed with video documentaries, audio interviews and other multimedia clips.

The site is put together with original video and audio created by Gyimah and other "backpack journalists" - people who are able to shoot, direct, edit and present documentaries and news reports using a digital camcorder, a laptop and the latest film-editing software."

In the coming weeks it'll feature more video showing the distinct differences between videojournalism across various strands, including IM6 Videojournalism highlighted by uber lecturer and super blogger Andy Dickinson on his blog recently.

The Outernet, Video hyperlinking in a multistrand interview and film, and pod-blogs will soon be evident.
Posted by Dr David Dunkley Gyimah at 10:40 am