Left side versus Right side new journalist - which one are you? 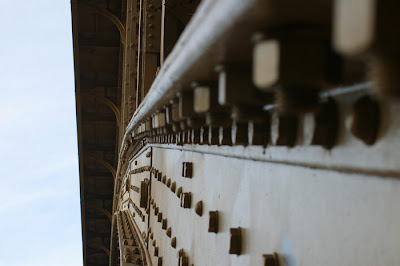 Can you see what it is yet? An image that requires spatial interpretation

Minutes later a sea of hands naturally sprung up.

The question posed to professional journalists sought to gain an understanding of their artisan credentials.

Whom here considers themselves an artist?

It is a ridiculous question for scribes and frankly also phrased this way:"Who considers themselves a writer", isn't, worth asking.

But in some small and perhaps significant way this sits at the heart of the new new thing we're wrapping ourselves around - multimedia.

Around the 1860s the French physician Paul Broca was one of the first to unveil the functions of the brain and since then many neurologist have documented the hemispheral war between the two lobes.

But some things have become standard: the left brain eulogises words, sequences, abstract and analysis as its attributes, whilst spatial awareness, maths, images imagination among others exercise the right side of the brain.

And when we look at right side functionalities you might as well posit multimedia there, though, yes, writing is left side.

This might set up a couple of questions for which I'm not qualified to answer, but, pose well why not?

What graphic students set out as multimedia has a different meaning to where journalist place their store.


But the questions?
There's a reason not all of us can draw, as much as we haven't mastered the new tenants of multimedia - whatever they may be.

If a contemporary form of journalism is to emerge from the kinetics of now, then it isn't merely about learning tools such as Flash, Director ( ??) of SWX, is it?

Is it about finding ways of developing right side brain functions earlier on in the game, by say, incorporating innovative exercise, nay even, Art (scorn!!) and maths (code) into the education of journalism.

AT THIS POINT DAVID'S CLEARLY LOST IT!

For just as we've nutured the science of writing, literally from infancy at school to a higher state of delineating complex subjects into decipherable quintissential strings of letter ie words, should we not also be seeking artistic merit and code as a feature of advancing our multimedia, multimodal new disciplines?

And if we are to, what and which syllabi to start with to see the next generation through?

And if we dare, is that journalism any longer?

I studied Applied Chemistry for my degree and took Art seriously dropping it before A-levels.

One of my lecturers considered me dylexic when I failed miserably to write a gas flow computer cycle.

Truth, I couldn't see the point; oh the joys of youth :)

Has it made me a better journalist?

I couldn't tell you, which somehow mutes my point, but what I have belatedly realised from that discipline is its approach to problem solving and mind mapping - particularly organic chemistry which often had me rather absurdly building three dimensional bonding molecules in my mind into 3d fixtures.

Which doesn't mean wihtout the sciences or art, you're unlikely to be the Flash web guru you are today.

That's not the point here.

I'm just as exercised over the next code-ridden application to shimme across my desk.

I'm merely agonising over whether a new set of rules, principals, training needs to fashioned by those clever people in news and academia towards what might be termed causal story telling [in its simplest form, if that isn't tautology]

That is, the if and then; if this happens, then where does this go.

You'll note those are some of the rudimentary principles behind Flash

Technlogy inspires art and art inspires technology and somewhere in there perhaps some inspiration is required for the new 4th quadrant of journalism: space.
Posted by Dr David Dunkley Gyimah at 8:33 pm